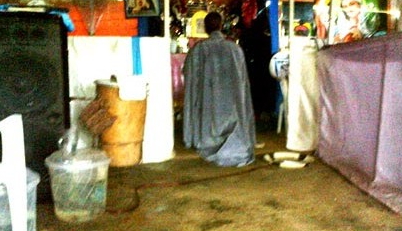 Drama ensued on Friday at a Customary Court sitting in Mapo area of Ibadan, the Oyo state capital, after a Shepherd in charge of a Celestial Church’s parish accompanied his mistress, Omolara Ojeyemi to the court to witness the dissolution of her marriage to her legal husband.

The priest, Prophet David Adebayo, amid tears, told the court that he was responsible for the pregnancy his mistress was carrying. He, however, pleaded for forgiveness for impregnating Omolara , who is married to one Abiodun Ojeyemi, a staff of Nigeria Breweries Plc.

“My Lord, anytime Omolara left her husband in Ibadan, she used to come to meet me in Lagos where we usually have fun. Sometimes, she comes after her closing hours in her office and returned to Ibadan the following morning.

“Omolara only told me that she and her husband were no more in good terms even though she already had two children for him. I swear to the holy bible, I didn’t intend to destroy her relationship with her husband, she is just my girlfriend.

“The pregnancy she is carrying belongs to me. I was the one who deflowered her during my National Youth Service Corps (NYSC) days. I followed her into the court to ensure that her union with Abiodun is dissolved today not that I am daring the court’s power.”

Adebayo however, apologized to the court for causing so many disharmonies to Abiodun, Omolara’s husband and for having unlawful sexual intercourse with a housewife.

The president of the court, High Chief Ademola Odunade subsequently dissolved the seven year-old marriage between Omolara and her husband (Abiodun), but ruled that Abiodun should take custody of the two children their seven- year-old marriage had produced.

In his remarks before the ruling, Odunade lamented that the society was fast undergoing an unprecedented decay in morality especially how adultery was ruining marriages. He described as unprecedented how a concubine could be so bold to accompany his mistress to a law court despite knowing that the act is an illegality.

“It is so tragic that a man can deliberately impregnate a housewife with children. It has never happened in the history of this court that a concubine will accompany his mistress to the court with the intention of daring us, saying nothing will happen.

“In the interest of peaceful living, the union between Omolara and Abiodun has ceased to be henceforth. Abiodun shall take custody of the two children produced by the union.’’

Narrating ordeal to the court, Abiodun, a staff of Nigeria Breweries Plc said his wife (Omolara), was an unrepentant fornicator despite his genuine love for her.

“My Lord, ever since I got married to Omolara seven years ago, little did I know that she had been occupied with all sorts of escapades in the name of going to church vigil. What I know is that she usually told me she was going for church vigil and I never had any reason to suspect her because I trusted her.

“However, since June this year, Omolara started starving me of sex. Before I eventually knew the truth, Omolara had told me that her concubine was her uncle and I was relating with him well as an in-law.

“One day, I got home and discovered that she had packed all the property away including mine. In fact, I have never failed to perform my responsibility as a husband to her and as a father to our children.

“It will be wrong for Omolara to hide under any stupid disguise to be neck deep in adultery. Omolara’s concubine is a priest at a Celestial Church, Emmanuel Parish, Elewiodo-Ojo, Ibadan,” Abiodun said.

Testifying in the matter, Omolara’s father confessed that Abiodun was a complete gentle son in-law whom he liked so much. He confirmed that he usually render Abiodun and Omolara monetary assistance anytime they were in need.

“I know that Abiodun has a great future ahead of him and I used to tell Omolara, my daughter to keep calm. If there was any problem, Abiodun never hesitated to inform me.”

“I never gave any wife to that naughty concubine and I know that he only wants to cause disaster to the happy relationship between my daughter and Abiodun,” Omolara’s father said.

Omolara’s mother also added that her daughter had been expelled from the church after she got pregnant for her concubine.

Others who testified corroborated Omolara father’s testimony. They all confirmed that Omolara was deeply into extra-marital affairs even with some other men.

Abiodun’s younger brother told the court that he had at various times caught her in different hotels with different men on adulterous mission. He however, said that he refused to tell his brother in order not to be seen as a trying to break their marriage.

Omolara, who was the plaintiff in the case, however told the court she was no longer interested in continuing with the marriage. She said Abiodun had threatened to attack her with scissors.

She also claimed that her husband, Abiodun, was responsible for her pregnancy because she took in shortly before she moved out from her matrimonial home.

“My Lord, I can no more endure hunger and lack of care in Abiodun’s home. My parents have been responsible for our daily needs including feeding, clothing and our children’s education.

“Worst still, Abiodun used to unleash mayhem on me. My Lord, enough is enough, please, separate us,” Omolara stated.

Police Seize 1427 Live Ammunition From Armed Robbers In Makurdi Benue State, Arrest 5
Benin Man Who Sent Wife To Italy For Prostitution Disgraced As He Attempts To Marry Another Wife