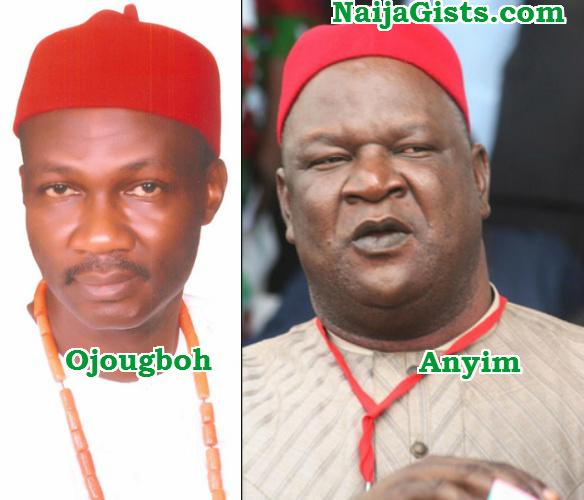 PDP’s National Vice Chairman (Southsouth zone) Dr. Cairo Ojougboh said he was ready to face the ex-SGF in court to prove his sole ownership of the controversial housing estate.

At a media briefing in his Abuja home late Monday, Ojougboh, reacting to what he described as “the show of shame”, which he said Anyim sponsored against him on Monday, accused the former SGF of acts of desperation “to cling onto his loot and spoils of office without putting into consideration the millions of Nigerians he is depriving of the dividends of democracy”.

The Centenary City project is sitting on a land area covering over 1, 500 hectares, the size of three districts in the Federal Capital Territory (FCT).

The PDP chieftain has petitioned President Buhari, stating the facts relating to the transaction and the role played by Anyim in what he described as “a scam” perpetrated by a United Arab Emirates company, allegedly operating as a front for Anyim.

Ojougboh said: “Yes, the former president signed the papers as presented to him by the former SGF. He was not properly briefed because of vested interests.

“I can defend him; he was not part of the fraud. If Jonathan had been properly briefed, he would not have approved the project, let alone going to perform the ground breaking.

“The former President thought that the Centenary City was for the good of all Nigerians because of the centenary spirit. Unknown to him, it was the private project of the former SGF and his cohorts.

“I am calling on President Buhari now to revisit the centenary city project and he will be shocked that the project is owned by a private individual, but procured with government funds”.

According to Ojougboh, the original landlords demanded compensation from the Federal Government, “but the sponsors of the project used a private firm to pay them N1.2 billion. He asked: Where did they source that money from?”

He continued: “How can an individual still serving in the government get such a huge sum to pay compensation without government knowledge?”.

Ojougboh alleged that the money was paid into a private company’s account.

He said: “President Muhammadu Buhari should direct the Department of State Services (DSS), the police, the Directorate of Military Intelligence as well as the Economic and Financial Crimes Commission (EFCC) to look into the matter.

“The President must insist that each of these security agencies should carryout independent investigations so that the depth of the matter would be reached. I am available to offer the much I know from my independent quests on the matter”.

Ojougboh, a medical doctor, insisted that the project was a scheme used to defraud the Federal Government in taxes, stressing that the Free Zone status given to the multi-district estate was a fraud.

Ojougboh also quoted Anyim as saying that the project was worth $4 billion, adding that the process violated the rules guiding the granting of free trade zone status by the Nigerian Export Processing Zonal Authority (NEPZA).

The PDP chieftain, who was chairman of the board of NEPZA during the project’s conception, said the board did not approve a free trade zone status for it.

“I can categorically attest to the fact emphatically and unequivocally, that the board did not approve the grant of the status of free trade zone to centenary city.

“Centenary city cannot be a free zone because it is purely a residential estate within the confinement of the Federal Capital Territory and it is implicit that those who live in the free trade zone will require re-entry visa for ingress and egress.

“This is against the tenets and spirit of the Public Service rules for a public servant to own such a business whilst in government,” Ojougboh said.

The party chieftain stated that his attention was first drawn to the scam by the Anti-Corruption Network, and that he had voiced his opposition to the anomaly.

“It was meant to give import duty to the owners through the back door. The consequence was to rob Nigerian masses of their land, revenue and retard the industrial growth of the nation.

“Therefore, for every one job the project creates today, it robs the nation of over 10 jobs in taxes and industrial development”. Ojougboh stated.

Ojougboh raised some questions for Anyim:

Anyim’s media aide, Mr. Sam Nwaobosi, declined comments because, according to him, the matter is in court. In a telephone conversation with reporters in Abuja yesterday, Nwaobosi said Anyim would not take up issues with Ojougboh.

Said he: “Senator Anyim has gone to court to sue him for defamation on the previous press conference and interviews that he granted in which he accused Anyim of almost all these things you said he is saying now.

“Since he feels aggrieved by what Cairo (Ojougboh) has been saying and writing against him, he is pursuing a very civilised cause by going to court to plead his case.

“So whatever Ojougboh is saying, he will have an opportunity in court to explain and then plead his case.”

Happy Birthday To Me, Myself & I
MFM Pastor Babatunde Genesis’s Wife Begs Court To End 2-Year-Old Marriage Over Cst Beating