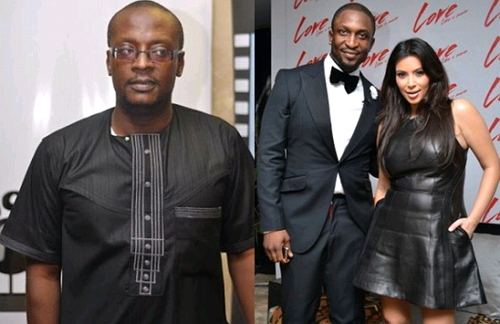 Feb 18, 2013- Charles Novia: Shipping Kim Kardashian To Nigeria For A Concert Is A Waste Of Money & Resources

To those who have no clue who this guy is, Charles Novia is a very interesting author and a critic of Nollywood movies stars.

He was the guy who revealed to us the hidden secrets of top Nollywood stars last year in his Nollywood till November memoir.

The guy happened to witness Kim Kardashian live at the just concluded love like a movie concert that took place at the Eko Hotel in Lagos on Sunday Feb 17, 2013.

The concert was organized by Nigerian R & B King Darey Art Alade.

Get ready as you read this interesting tell-it-all experience of the concert from the one and only Charles Novia……a round of applause audience….

I first met Darey in 1999 at Jazzville, a unique and bohemian music club of sorts which was the core pulse of the Lagos weekend social scene for many years up till 2001 when it was officially closed. Darey was a quiet young man then who would perform a few songs and play excellent notes on the keyboard. Then, I was somewhat of a total artiste moonlighting with stand-up comedy every friday night there as the in-house emcee who took over from the late Mohammed Danjuma of blessed memory.

For over a year, every Friday night I would guide the good-natured revellers through the program for the long night, with occassional singing with the band on my part. Within that period, I met Darey who actually was honing his skills through the Jazzville experience with the help of Muyiwa Majekudunmi, the founder of Jazzville.

Darey and I maintained some staccato contact for a few years after that and I have admirably watched his growth and ascendency on the Nigerian Music Scene with pride, being a ‘Jazzville alumnus’ like him.

He’s a perfect gentleman to the core, very composed and focused. Sterling qualities he got from his late father, the Maestro Art Alade of the popular ‘Bar Beach Show’ of the seventies on television. This Darey, a refined chip off the old block, a few hours ago showed the whole of Nigeria why he shouldn’t be underestimated in no way. His Valentine Concert, ‘Love…like a movie’ is just about the best musical concert in modern Nigerian history I have ever seen. And the thousands of guests who attended all agree with me.

The concert held at the Eko Hotel Expo Hall a couple of hours behind schedule. It took off at about 8.30pm and for nearly two hours, every member of the audience was held spellbound by the impressive mix of music, drama, pyrotechnics, visual effects, artistry and choreography of the biggest concert experience in Nigeria.

It was Darey all the way with the guest Nigerian artists all given deliberate moderation of appearances through the songs. The expansive hall went dark when the show was about to start and the huge stage screens were suddenly transformed into huge displays of beautiful moving visuals of techo- clip art and arresting picture projections.

Our eyes were made by the lighting to focus on the huge square multi-cubicles on the centre stage which was also the show’s backdrop. As the projected images fluidly came on the screen one after another, Darey shockingly appeared in the middle of one of the cubicles which seemed to open up to let him out.

The crowd went wild at the effect and Darey sang ‘At all, at all’ featuring an absent 9ice. ‘Carry dey go’ followed and this time Tuface Idibia was transported onto the stage by some fairy-dancers with beautiful costumes. Thereafter, Darey sang some songs from his three albums and also took the crowd through some popular ballads such as ‘Lady in Red’, ‘Endless love’ (duet with Waje), ‘I’ll make love to you’ (featuring PSquare and Timi Dakolo), ‘End of the road’ and ‘What a wonderful world’ among others.

When he performed the Frank Sinatra classic ‘My Way’, he twice said ‘Rest in Peace, Goldie’ and seemed to break down in some verses during the song. Perhaps with the poignant gloom of Goldie’s death still haunting him, the other original hit ballads of his, ‘Not the girl’ and ‘No stars’ had Darey wiping off tears from his eyes while singing both songs. The audience gave him a rapturous applause when he sang ‘Not the Girl’ and even sang along with him. ‘I like the way you are’ got a lot of people grooving.

It was not so much the songs he performed (which were all perfect) that got us all wowed but the incredible choreography of the Dance troupe, a caucasian ensemble, who mesmerised everyone with a combination of elaborate costumes, bio-constructivism and dance sequences which were simply breathtaking.

Added to the lighting effects and the near-perfect stage management, the show ended with huge white balloons the size of SUV tires floating across the hall, giving the audience a retro-glimpse of childhood excitement at the balloons! There were a couple of down points in the concert though. A little microphone hitch for one of the singers during the rendition of ‘I will make love to you’ almost marred a perfect sing-along for the members of the audience.

Also, the much awaited Kim Kardashian. She came in at the beginning of the show and spent just forty-five seconds or so on stage! That was all we saw of her. She introduced herself and asked the audience to prepare for a night they wouldn’t forget and left. Shikena! She was even glum, as if it was a task to just be there at all! Now, I’m not a fan of the lady and I don’t even watch her show but I could not understand why some ladies in the audience were screaming when she came on stage! Na wetin? Naija girls sabi overdo at times sef! Kai! One lady behind me screamed out ‘ I love you, Kim’ as Kim walked off the stage. I turned to see who it was; an artificial looking lass with fake eyelashes. Na so dem dey take start!

If you ask me, there was no need for Kim Kardashian at all in this concert. None whatsoever! Was she paid huge sums and flown here to just introduce Darey? It didn’t make sense to many. My two cents on that would be that Darey’s management knew they had a great show planned but needed the ‘ooomph’ factor to pull in more crowds. And Kim Kardashian was that factor, perhaps. Anyway, the show would go down in the history of concerts in Nigeria as the best. I mean it!

What I have described has not even done justice to the concert Darey organised. Its far from it. The pleasant faces of those who attended are enough to agree with me. Everyone kept talking about the concert as we walked back to our cars and tweets and blackberry broadcasts soon started about the concert even before we left the venue! Folks, Darey has raised the bar.

This kind of concert is one you can only get at the O2 in London, I can bet you on that! I’m told the show took over 15 months of planning and execution. It was worth every penny and energy spent on it. Darey has shown that he’s a king in his own kingdom with territorial ambitions to conquer pretenders to his throne. I am quite proud once again of my ‘Jazzville colleague’. He did the stuff national honours are made of with this concert.

Charles Novia is a talented man. Don’t you just enjoy the story……. I do….