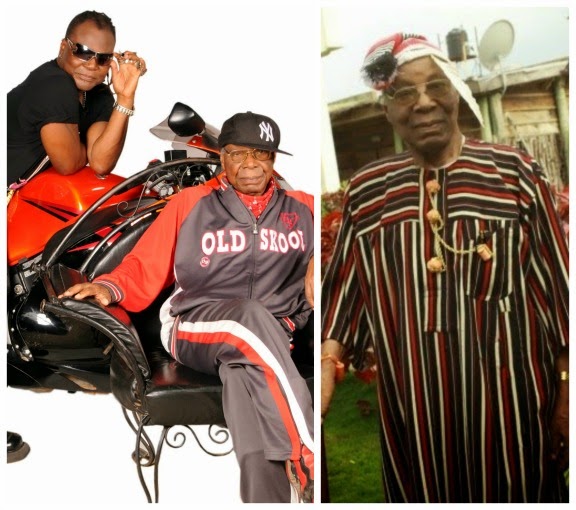 In a recent media chat with reporters in Abuja, controversial area fada, Charles Oputa aka Charly Boy who lost his father to stroke few weeks ago narrated his last moments before death.

Charly Boy said his father got hit by stroke during his visit to the village back in February and since then, he didn’t recover until he gave up the ghost.

Do you wish God kept your father a little bit longer?

Before Nko, but his time was up and he had to answer the call. He lived a good life. He was outstanding, totally different and I am so very proud that he was my father. Even though in the beginning I rebelled against all he stood for, it all eventually caught up with me. As I matured over the years, I found out that he had done me so much good. For sure I’m going to miss him like mad, but I have wonderful memories to tie me over.

What does your tradition expect of you from now till your dad is buried? Are you to stay indoors 40days? Cut your hair? What is now expected of you, or any other member of the male/female Oputas?

I am not too knowledgeable about the traditional aspect, my relatives in the village have not told me about any specific things I should do. For now, all I am doing is planning and receiving guests who come to sympathise with the family. My father will first be buried as a Christian and a Knight in the church. He holds the title of (Odua) the oldest man in the village. Tradition says, he will require a second burial a year after the first, that’s the much I know. I shaved my hair way before he passed on, he loved my new look.

At the point when you wrote the prayer request letter for your dad, did you harbour any fears that your father may be spending his last days on earth?

He was in the village when he was hit by stroke on the 14th of February, 2014. At about 3:30pm, I got a call from one of his aids informing me of what had happened. It was a Friday; one of my daughters had just come back from the US a few days before. So, I sent her and my brother immediately to Owerri to assess the situation till I got myself together and arrived on Monday. My brother, I didn’t sleep from Friday to Monday morning. I was in a trance, the worse seized my mind. I cried when I was alone, in my household it was as if he had already passed, my father had never been sick, ever! It was the most painful time in my life; the thought of losing my father, my best friend was too much to deal with. But typical me, by Monday as I headed to the airport to catch the flight to Owerri, I was mentally ready for the worst. By the time I saw my father in the hospital, I was devastated, it took all the courage to hold back the tears. Then I knew it was down hill from there. I knew it was a matter of time, but I was ever determined to do all I could for my best friend. Since childhood I have always had that sharp instinct, intuition or premonition about things and people. I should have been dead long time ago, living the kind of life I had lived, but I have survived because of this gift from God.

Seeing him helpless those harrowing weeks, what went on in your mind?

A lot of pain. Ever since I can remember, I have never seen my father down. I have never seen him sick. I prayed that God shouldn’t let him suffer one bit. I couldn’t stand the fact that we could no longer have the kind of robust discussions we used to have. Most of the time he was quiet, and I will always wonder what’s going through his mind. God has been kind to our family, He made his passage peaceful and I am thankful.

Were you beside your father when he spent his last moments on earth?

He died in my house, too bad it wasn’t in my arms. After the hospital stabilised him, we were advised by the doctors to take him home and give him the care he needed to nurse him back to life. But I knew that age was not on his side. My father was over 96years. On Sunday the 4th of May 2014, I went down to his quarters to see him. He had not been eating properly. As I went on my usual round to see him and crack a few jokes before I go do my thing, I noticed he was unusually weak. As soon as I entered his room, he beckoned on me to come. I bent over to kiss his forehead and he said to me “Am sorry Charles”.

Why did he say that? Did he regret not being there for you when you really needed him?

I asked him why he was sorry. I couldn’t imagine that with his state of health, all my father was thinking about was all the money I was spending to give him the best care and the love I showered on him. He was worrying about me? Hummmm. At that point I just laughed and said to him, “daddy, get well soon so that I won’t send you a bill you cannot pay”. I asked the nurse to give him his bath, while I go and do same and come back to feed him myself. I was just getting dressed after my bath when the nurse called me to say I should come down quickly. At that point I knew what I have been getting myself ready for, has finally happened. I thank God that I not only spent quality time with him, we became almost inseparable.

What were his last words before he passed on?

‘I’m sorry Charles’. I had just left his side about an hour to have my shower when I heard the man had given up. I rushed back to where he was and found him dead. He had prepared my mind for this few weeks before his death when he told me to stop spending money on his health; he was literally telling me his time was up. I told him I wasn’t complaining about it, why should he be bothered about it, but his response was just Charles, I am sorry.

Did he write his will and how are you sure it won’t cause any hitch among the family members?

That’s funny you know. It is a man who has what to share that writes a will. My dad did not have anything much because he was not a corrupt man when he was serving as Judge of the Supreme Court. He died a broke man because he didn’t want to toe the path that would bring shame to the family and rubbish his integrity in any way. He taught his children what they needed when he was alive, which are uprightness and education. He lived with me before he died, so there is nothing to share because there is nothing in the first place. My brother, I am not sure of any will.

Tell us about the concert you plan to stage for your late father?

My father without a doubt was a great man. He’s the last of the Titans. When people who come to see me and say sorry to me, I correct them by demanding they say congrats to me. Here is a man who has led a good life, who stood for justice especially for the common man, who stuck to one wife for over 70yrs. I’m having Nollywood come down to Oguta, the cream of Nigerian musicians, The Hard Riders Biker Club from Port Harcourt, Nigerians will be there. I expect Daddy Showkey, Felix Duke, TerryG, Dr Alban, Davido, Duncan Mighty, Indeed it will be a grand celebration of a damn good life. People go bow, dem go hear am.

What will you miss most about him?

I will actually miss a lot of things about him. I don’t know if you can get it if you have never been there. I loved my father to bits, he was like my hero. He dared to be different like me; he was like no other, like me. I will miss our regular evening provoking conversations, when he would come over to my part of the house, as I serve him his small stout while I drink my coke and we would talk endlessly about many things under the sun. I will miss his company especially all the times he accompanied me to different shows. Full of wisecracks, he made life’s journey so simple and uncomplicated, he exemplified the significance of life. Head or tail, I know he indisputably deserves the heavenly gift of paradise.

How do you feel being fatherless?

I have joined the club of the fatherless people. I hope that one day they will make me their president. If you know how close we became, you will feel very sorry for me. But I’m up to the challenge. Now I have my mother to concentrate on. She was my first love anyway before my father got into my good books. So, all the love and care will be transferred to her full time. Thank God I’m not an orphan yet, that would have been a serious problem.

What are those fine qualities you inherited from your father?

We stood for justice especially for the common man. We were both deep thinkers. We are both men who are content and at peace with self. We are both committed to changing our environment. We love our wives dearly, my father till his death spent over 70yrs with the same woman, I have spent 37yrs still counting. We have strong love for our family and always very protective. My father wasn’t phased with or by material things, same here. We love to read and learn. When we were younger we both used to be such flirts. We both believe in one man one woman. We both are very spiritual beings.

Ini Edo’s Husband In Green Card, Immigration Fraud Mess; Ex-Wife Reports Him To FBI
Children Of Bird That Turns To Witch Woman Speak “Our Mother Isn’t A Witch, She Is Ill”