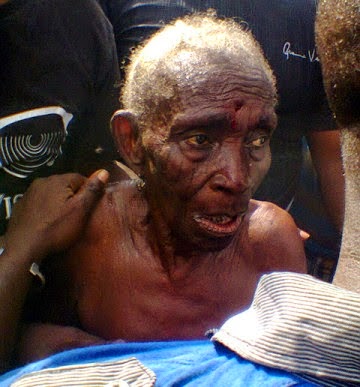 The true story behind the black bird that turned into an old woman on Wednesday in Ajegunle Lagos has surfaced.

The sons of the aged woman have told the truth.

The two men explained that their mother had wandered off some days ago and they had been looking for her.

The men, who said they lived in the Iju Ishaga area of the state were said to have been puzzled as to how their mother walked all the way to Ajegunle.

A policeman told Punch “This morning two men came to the command claiming that they were the sons of the woman. The men said their mother was not a witch and were very angry with the manner the rumour was spreading. They said they were shocked that youths could attack an old woman in her 80s and they were even asking for justice because the woman sustained bruises on her head.”

“Yes she has been released to her son. The family said due to her old age, she was very ill and was brought from Ibadan to Lagos to stay with one of her sons. The woman’s daughter-in-law said she went to buy drugs for her nearby, but by the time she returned home, the woman had left the house.”