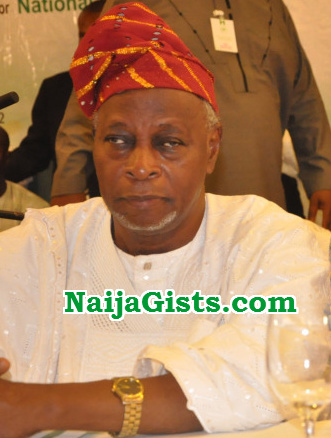 The Nigerian Police have stated that the kidnap of ex-presidential candidate, Cheif Olu Falae was a case of attack rather than kidnap.

Former Secretary to the Government of the Federation, SGF and chieftain of Afenifere, Chief Samuel Oluyemisi Falae, yesterday received the shock of his life on his 77th birthday as gunmen numbering over 20 invaded his farm in Ilado village, Akure North area of Ondo state and abducted him.

He was picked at about 1pm and by 3.20pm, the abductors have demanded for N100m as ransom before the septuagenarian could be freed.

The police authourities however said it was a case of attack rather than kidnap.

He said that contrary to earlier reports, “It wasn’t a case of kidnap but an attack by Fulani herdsmen.”

Governor Olusegun Mimiko was said to have summoned an emergency Security Council meeting on the matter.

Born on September 21, 1938, the former Finance minister, who is also national chairman, Social Democratic Party, SDP was kidnapped by over 20 Fulani herdsmen who invaded his farm, attacking his over 200 workers.

Many of his workers, including the farm manager simply identified as Bruno were fatally matcheted while others were reportedly wounded and are on admission in different hospitals.

Reports from the family said that the herdsmen have been having issues with the workers in the farm over the grazing and destruction of the farmland by their cows.

The herdsmen reportedly came back yesterday in large numbers and attacked the farm before abducting the politician.

Vanguard was told that on arrival, the herdmen shot into the air, a situation which made the workers to flee. They reportedly beat up Chief Falae and dragged him on the ground when he refused to go with his abductors.

Police source however said that the herdsmen may have been used by other interested party who have requested for a ransom.

The herdsmen, according to police source may have been paid off and the victim handed over to those who made contact with the family after carrying out the hatchet job.

Spokesman of SDP in the state, Remi Olayiwola said the abductors have contacted the wife of the victim, Mrs Rachel Falae and requested for N100m ransom expected to be paid between yesterday and today.

The ransom has been reduced to 90million.