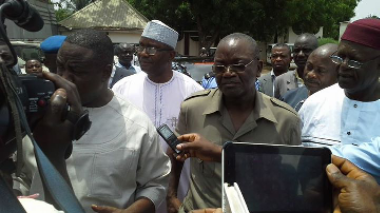 At least 20 people includ­ing the Politi­cal godfather of former Governor Ga­briel Suswam, and elder statesman, Chief Atoza Ihindan, were yesterday killed by some unknown gunmen in Katsina Ala town in Katsina-Ala local government area of the state.

Saturday Sun gathered that Ihindan, a Peoples Democratic Party, (PDP) stalwart had gone to inspect a perimeter fence he was building along Government Secondary School Katsina -Ala at about 2pm when two armed men, rode on a motorcycle and shot at him point blank, killing him on the spot.

Our source said by the time the dust settled, some people were killed while the gunmen escaped in the midst of the pandemonium leaving residents to scamper for safety.

Narrating how Ihindan was killed, a resident who pleaded anonymity said, “They stormed the place in a commando style, and killed him on the spot.

“The old man was with his aide and a police escort who had noticed the armed men, and made desperate effort to defend Chief, but he was overpowered by the well armed men because they had superior fire power.

“The gunmen eventually succeeded in killing the old man after shooting his police escort who was seriously injured and in critical condition at a public hospital in Katsina/ Ala at the moment.”

Our source explained further that after the armed men successfully killed the septuagenarian and Second Republic lawmaker, they escaped without any resistance while noting that some gun men had about the same time stormed Yoyo Council Ward of Katsina-Ala and started shooting sporadically in every direction.

Also, on Thursday night, it was gathered that some armed bandits were said to have raided a beer parlour at a Market Square in Tor Donga area of Katsina- Ala where they killed 12 persons including a woman, who was the bar attendant and her one year old baby on the spot.

“After raiding and killing their victims at the drinking spot, the gang sped off on their motorbike and continued shooting indiscriminately at any human being they came across, or anyone that dared to stop them and that led to the killing of another seven persons including a teacher in one of the local schools in the community.”

At the time of filling this report, it was not clear whether it’s the same gunmen who had been going round Katsina-Ala local government and killing people but within the last 48 hours, more than 20 persons including a couple who were having their dinner are said to have been killed by the yet to be identified gunmen in the area.

Asked who could be responsible for the recent rise in the spate of killings in the area, our source said, “no one is sure of anything now, because so much rumours and stories are flying but we expect the Police to unravel the mystery and stop this unending killings in Katsina/Ala before everyone resort to self help.

“The way we are going, anarchy is looming, the killing of Chief Ihindan is one too many, we also recall that a top Police Officer from the Force Headquarters who was a member of the Task Force on Kidnapping and cow rustling, on a special mission to the state was also killed here few weeks back by unknown armed men.

“As I speak with you there is palpable tension in the whole of Katsina/ Ala and other neigbouring towns and communities over the killing of Chief Ihindan and if something is not done very fast this might snowball into a major bloodbath”, the source added.

Meanwhile, the state Governor, Samuel Ortom has condemned the spate of killings going on in Katsina- Ala local government area council and environs in recent times.

In a statement signed by his Special Adviser on Media and ICT, Tahav Agerzua and made available to Saturday Sun, the Governor lamented the trend of assassinations in the area and described it as unacceptable.

He expressed sadness over the killing of Ihindan whom he said had a reservoir of knowledge in politics and would be greatly missed and called on security agencies to nip the situation in the bud with a view to bringing the perpetrators of the dastardly acts to book.

Hindan who is an erstwhile member of the Benue State House of Assembly left behind three wives, many children and grand children.

When contacted, the State Police Commissioner Hyacinth Dagala who confirmed the killing of the septuagenarian disclosed that he was killed under a tree while inspecting a perimeter fence on his plot of land with his aide and police orderly when unidentified men on a motorbike shot him.

Dagala also disclosed that the command recorded the killing of a woman and a child by some unknown gunmen in Tor Donga explaining that a manhunt for the masterminds of the killings had already commenced.