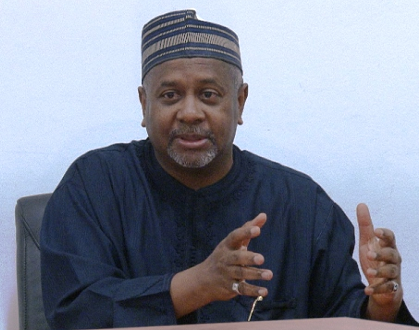 Contrary to insinuations that President Mu­hammadu Bu­hari ordered the arrest of former National Security Adviser, Col Sambo Da­suki because he was the Army officer who led sol­diers to arrest him (Bu­hari) on the day he was overthrown as military Head of State in August 1985, facts emerging from the security circle indi­cate that the retired Army Colonel is wanted in connection with multi-billion dollar funds domiciled in his office as NSA.

Between Thursday evening and 6pm yesterday (Friday), Department of State Security Service (DSS) operatives had been searching for Dasuki in his Abuja and Sokoto homes. Though, he was believed to be in his Abuja home. He eventually allowed the DSS detectives to enter his house to execute a search warrant. At the end of the search, it was learnt that items recovered from the house included $40,000, three automatic rifles and his travel documents. The operatives thereafter va­cated the house.

It was however gathered that all funds budgeted for the war against Boko Ha­ram terror and other securi­ty issues were all domiciled in the office of Dasuki as NSA. There are allegations that some of the huge funds were diverted for some ex­traneous purposes rather than the prosecution of the war against terror.

It was also learnt that defence contracts, includ­ing purchase of arms and ammunition that used to be under the Ministry of Defence, were taken over by Dasuki. He dominated the environment, so much so that the Ministry of De­fence was no longer in the know about these transac­tions as they were fully taken over by the office of the NSA.

With huge funds under his control, Service Chiefs and other security chiefs also began reporting to Da­suki, it is alleged.

The Sun further gathered that the disburse­ment of over $3 billion USD already expended in the fight against Boko Ha­ram, was presided over by Dasuki. At a point in time, the funds were also alleg­edly used to finance the ruling Peoples Democratic Party (PDP) then especial­ly during the electioneering campaign. Inside sources also say that the immediate past Service Chiefs ought to be quizzed because they also were parties to the disbursement of the terror funds.

It was further gathered that under Dasuki, Min­istry of Defence became toothless and a mere feath­erweight, a development that had never happened before in the nation’s his­tory.

At a point, former Minis­ter of Defence, Gen. Aliyu Gusau became disgruntled and wanted to go because Dasuki took over some of his duties. The former Min­ister felt he was just warm­ing seat. Another reliable security source added that the invasion of Dasuki’s residence by DSS operatives has nothing to do with whether he led a team of soldiers to arrest Buhari on Sallah Day some years ago.

“Some people have been trying to portray Buhari as being unforgiving, venge­ful, and that he never for­gets. This is not true and has no connection with the effort to arrest the former ex-NSA. DDS invasion of Dasuki’s house has nothing to do with Buhari. Simply put, his travails with the DSS has to do with bil­lions of terror funds he dis­bursed as NSA”, the source stressed.

[FROM ADE ALADE, ABUJA, THE SUN]