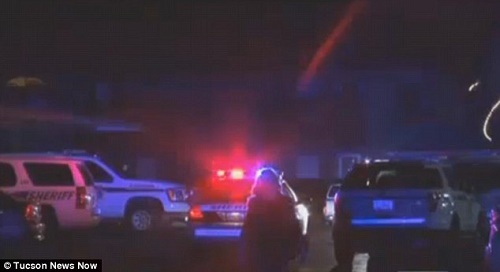 He was taken to hospital, where he is on life support, authorities said.

They responded after the children’s mother called 911 to report a threatening call she received from her estranged husband who had their daughters with him, according to Daily Mail.

Pima County Sheriff Chris Nanos said the couple was having legal issues, Tucson News Now reported, and the girls had been visiting their father at the time of the tragedy. He added that it appeared he had only recently moved into the condo, which was sparsely furnished.

When deputies arrived, they tried to talk to the man from outside the front door. But shortly afterwards, they heard one shot and forced entry into the home. The father and his two daughters were found inside, all with gunshot wounds. Deputies immediately began life-saving measures, authorities said.

The seven-year-old girl was pronounced dead at the scene. The five-year-old was taken to Banner University Medical Center, but succumbed to her injuries. A news release from the Pima County Sheriff’s Department said the Homicide Unit has taken over the investigation.