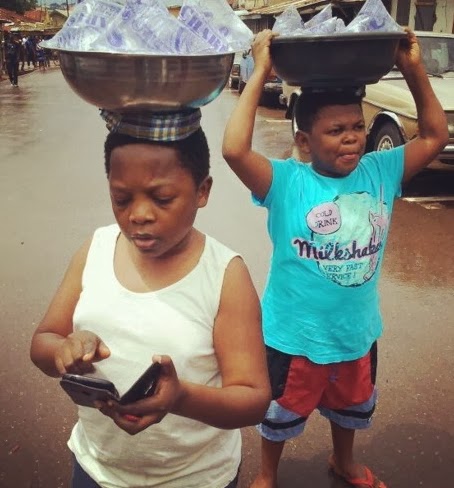 The sudden ban of comic Nollywood actors Chinedu Ikedieze alias Aki and his movie buddy Osita Iheme aka Pawpaw from producing movies in Ghana has opened the old wound between Nigeria and Ghana.

According to sources, the duo were recently prevented from taking part in a movie production in Kumasi Ghana simply because they’re Nigerians who require work permit to operate in the country.

The case is creating disaffection between authorities and fans from both countries due to lack of fair bilateral film policy as no Ghanaian has been banned in Nigeria for lacking work permit.

Although officials of the Film Producers’ Association of Ghana (FIPAG) debunked rumour of a ban, outburst by fans of the comic actors appears to be overwhelming.

FIPAG’s Public Relations Officer Mr. Michael Ola, who tried to douse possible tension, said the decision to stop the actors was because the director of the movie breached the association’s regulations, by not letting the actors know that they need a work permit to be part of any production in Ghana.

They were,therefore, advised to return to Nigeria to obtain an official work permit, and be ready to make payments for the continuation of the shoot.

Ola explained that FIPAG had no problem with the Nigerian duo, but feels the right procedure had to be followed, especially when the new executives of the association had laid out new strategies to make the industry better.

According to the Nation, Aki and Pawpaw said they’re  not bothered by the ban after their colleagues raised the issue at Patience’s Jonathan’s step-mother’s burial in Okrika, Rivers State on Saturday.

In June, the National Film and Video Censors Board (NFVCB) of Nigeria met with officials of the Ghana Cinematograph Exhibition Board of Control (GCEBC) on how to foster cooperation between their’ film industries. The Nigerian delegation, which was led by NFVCB’s Director-General Ms. Patricia Bala spoke with the Ghanaian Deputy Minister of Information, Murtala Mohammed, but it appears nothing is yet to come out of the communiqué, which is expected to guide the proposed bilateral relationship for future business dispensation.

A similar uproar occurred when Ghanaian movie industry allegedly issued a directive that no Nigerian actor would be allowed to work on any of its movies unless they pay a fee of $1,000 each.

In retaliation, the Film, Video Producers and Marketers Association of Nigeria (FVPMAN) placed an embargo on Ghanaian films, halting the distribution of movies by independent producers, and maintaining that if such films must be distributed, its right of ownership should be transferred to the FVPMAN on negotiation.

At that time, a delegation from Ghana, led by the Chief Executive Officer of A.A Productions Limited, Mr. Mustapha Adams, sought peace with its host.

FVPMAN Chairman Mr. Norbert Ajaegbu told his visitors that the decision to ban Ghanaian movies was without prejudice. He said there was need to streamline the distribution of movies in Nigeria, especially when Nigeria is becoming a dumping ground for second-rate movies with nudity content.

The meeting ended mutually, with both parties agreeing that Nigeria will no longer accept Ghanaian films that are not approved by the NFVCB, and that any foreign film being released in the country must follow proper channels, compete under the market forces in consonance with existing laws.

It was also resolved that possible areas of collaboration should be worked out for further talks between the two sides.

But the relationship between the two countries on film matters has been unstable; the crisis, usually resulting from imposition of levies by one country on the other.

Critics believe that collaboration by both countries, which are the leading film producing entities in West Africa, is expected to set an agenda for the exportation of appreciable cultural values that could be regarded as truly African.