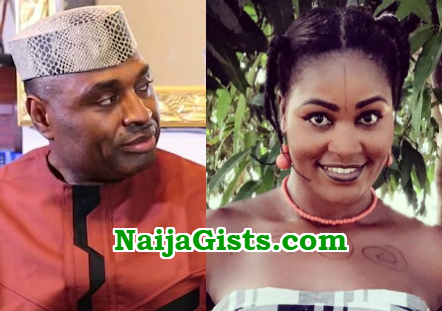 Feb 17, 2018 – Chizzy Alichi Thanks Kenneth Okonkwo For Calming Her Nerve On Set Of Her Debut Movie

How Did You Joined The Movie Industry

I have been acting since 2010 when I entered into the university. I was combining school and acting. My journey to stardom started like a joke. I saw an AGN banner in Enugu and I went to ask them about registration and I registered. That was how I landed my first role on ‘6 scenes’. A female friend informed me about the audition, so on getting there, they were almost rounding off. When I got there, the director called me and they auditioned and cast me immediately. Though I was so nervous because naturally I am a very shy person, I tried my best to perform well. They gave me the role principally because of my height. The title of the movie is ‘Magic Money’. I was paid N6, 000. I acted alongside Mercy Johnson and Bob-Manuel Udokwu. I was so happy, nervous and excited.

What movie shot you to limelight?

The movie that brought me into limelight was ‘Akaraoku’. A comic movie directed by Yul Edochie.

What has been your secret to success?

To me, what it takes to have a successfully career is to be persistent, work hard, believe in you and most importantly grace of God.

Some actors have complained about dealing with mouth odour in kissing scenes. What has been your experience regarding that?

I can’t deal with mouth odour. I take good care of myself especially my teeth so I don’t kiss anyhow in movies, I can’t even date a guy with dirty teeth in real life no matter how rich he is. So as an actor, if your teeth is dirty or have bad odour then it’s a no for me. The person can only get a peck because I have been paid to do so and act as a professional.

You have been called names for not dressing up like a celebrity. How does that make you feel?

A flamboyant life doesn’t make one a successful actor, rather it’s a choice. Looking is good business after all we are in entertainment industry but it doesn’t make one good actor. Also I was determined to make my family and myself proud. But my friends and other people didn’t know what I was doing. They were expecting me to wear the latest designer clothes, shoes, bags and hair; which is not a bad idea, but I was determined and focused on a particular project.

Why did you decided to erect a building for your parents?

The building for my parents was a dream comes true. I saved for it from when I was in school. I denied myself a lot of things but today, I’m so happy. My father said he can now die a happy man cos he worked all his life for it and he couldn’t achieve it. In his wildest imagination, he didn’t dream that something like that will be in his compound cos our compound was almost like a refuse dump before I built the house. I thank God. I came from a poor family but I was determined to make it through hard work. I was determined to make my family and myself proud. I didn’t want my background to discourage me. I didn’t like the way we always stayed back in Enugu during Christmas, while my friends would travel out of town and come back to tell me how they had enjoyed their holiday in the village.

Secondly, my dad had worked and saved all his life to build a good house for us. I am his favourite, so I was determined to make him happy. So, I started saving. I had worked in several outfits in Enugu before joining the movie industry. I actually starved and saved money to build my parents a befitting house. I’m a family girl, so I just like to carry my family along.

Before the completion of the house, I first moved my parents from a one-room apartment in a slum to a 3-bedroom flat in the heart of Enugu city before finally building a house for them in the village.

All that period, some people were laughing at me. But I discovered that those people are still staying with their parents in that slum in Enugu.

Any plans on marriage?

Do you have challenges keeping relationship?

I do have challenges in keeping relationships, that’s the reason I want somebody that is understanding and supportive. Some people will think you don’t care and all that. But there are a lot of things that need consideration for a relationship to work.

How was your first day on set?

I was tensed, shy but determined. Thanks to veteran actor, Kenneth Okonkwo, who was on set that day, he really carried me along. I can’t really remember the title of the movie but I was paid N6, 000 to feature in it. I wasn’t concerned about the money but the fact that my dream was coming true. I kept asking myself, ‘how did ordinary person like me get on set with an icon like Kenneth Okonkwo?’ I didn’t eat all day because I was excited and fulfilled.

Desmond Elliot Loses Aunt To Breast Cancer, Stages Awareness Walk To Save Others
Why Won’t My Husband Sleep With Me Anymore?- Sexless Marriage Victim Cries Out