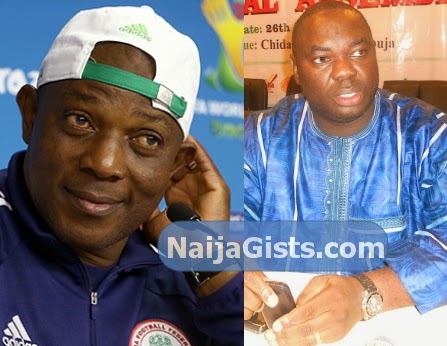 On Thursday, a court ruling in Jos  restored NFA Chairman, Chris Giwa back to office and less than one week after, he has promised to bring Keshi back as the coach of the Nigerian super eagles.

According to Giwa, Keshi will resume work today with his team.

Giwa made this known during a press briefing at the NFA secretariat in Abuja, urging all Nigerians to remain calm while the issues surrounding the NFA family crisis and the much-touted looming FIFA ban were resolved.

Giwa reiterated that his board had reviewed and decided to sustain the out-of-contract assignment given to the technical crew of the Super Eagles led by Stephen Keshi.

Read excerpts from his speech today in Abuja:

“It was agreed at our board meeting held Thursday that the technical crew headed by Keshi should remain in charge.

“The issue of qualification to AFCON 2015 is not about Keshi. Therefore, all he needs now is support from all of us.

“I don’t think whoever is coming in will have anything meaningful to contribute more than what is already on ground.

“So, all we need now is to rally round our brother Keshi and pray that God will bless the team with victory in their two remaining matches.

“I have spoken to Keshi and, by the grace of God, by Tuesday or Wednesday he should resume his normal duties as the coach of our national team,”.