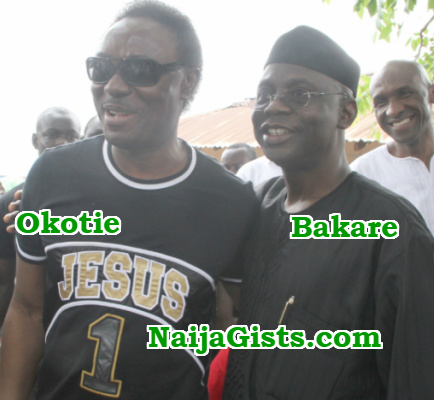 January 15, 2018 –  Did God Tell Chris Okotie And Tunde Bakare To Run As President? Why Did They Fail?

Prophets necessarily must be careful not to play God when they are prophesying;

This is the season when pastors fall upon one another to prophecy and many love to answer the title “prophet” or such other highfalutin appellations like “Apostle” “Bishop” “His Most Eminence” Seer” “Superior this and Superior that” that “confer” the authority on them to know the mind of God, hear His voice or hear voices, like Reuben Abati sarcastically said penultimate week, and see into the future like Nostradamus.

The urge to prophesy may be irresistible for reasons both altruistic and dubious. When God truly speaks to His people – which I believe He still does – it behoves on such instruments to relay God’s message to God’s people. There are also for-profit prophecies; many are those who will say this is the most common type of prophecies that fake, false or money-conscious prophets or pastors peddle nowadays.

Of the five-fold ministry of the teacher, pastor, evangelist, prophet, and apostle, the prophet is the most popular, most sought-after, and most lucrative, if I am permitted to put it that way. Congregants rush after prophets and many of those going into ministry prefer to be prophet than teacher. We must admit that this allure of the prophet dates back to biblical times.

The fathers – Abraham, Isaac, Jacob, Moses, Joshua, David, Solomon, etc – may not have prophesied for a living but they were Seers who also heard from God. Many of the most important biblical figures were prophets and Seers – Eli, Samuel, Ballam, Nathan, the young prophet, Elijah, Elisha, Isaiah, Jeremiah, Ezekiel, Daniel, Amos, to mention but a few.

The New Testament is also replete with prophets and Seers; our Lord and Saviour Jesus Christ being chief of them all. In those days, too, people flocked to prophets and believed in their words. Kings, nobles, and the lowly all took prophecies seriously. The Samaritan woman by the well of Samaria believed that Jesus was the Christ because, according to her, He told her all that had happened to her (John 4:1-30). Other ministers seek out prophets and Seers and I see nothing wrong in this essentially. Bible says where there is no vision; the people perish (Proverbs 29:18). But prophecy alone is not enough to run any ministry. We shall soon return to that.

Prophets and Seers are hot cake; more so “confirmed” prophets and Seers whose prophecies have often come true. The reason is simple: People want to know the mind of God concerning their situation; they want quick fixes and not the “Israelite journey” – studying the bible, much prayer, unending fasting, and rigorous vigil – that takes forever before answers trickle down from heaven.

But the prophets who soak themselves in this allure and celebrate the grandeur it attracts had better watched it: In 365 days we shall know whether they are true or fake prophets or, to quote Abati again, whether they truly heard the Voice of God or they heard voices. The media often engages in the ritual of marking the script of every prophet to see whether they passed or failed. In other words, when a prophet prophesies, he has unwittingly written an examination whose result will be out in 365 days! Those who pass are celebrated and their rating soars – as well as the traffic of congregants, I must say. For those who fail, however, there is an element of opprobrium and sarcasm, the type yarned by Abati penultimate week, in which his focus was the Catholic priest, Father Camillus Ejike Mbaka, friend of Muhammadu Buhari in 2015, prophesying his election but now his sworn foe, prophesying his disgrace out of office in 2019.

Media scrutiny apart, prophets necessarily must be careful not to play God when they are prophesying; even if they heard so clearly from God and He had specifically told them to go public with the prophecy. God is God and He reserves the right to change His mind at any time T, as they say, without taking permission from anyone. He made this clear to Eli (1Samuel 2:27-36) and to an angry Jonah concerning Nineveh (Jonah 3:1-10).

Have we forgotten Elijah’s experience with Ahab and Jezebel (Naboth’s vineyard issue, 1Kings 22:17-29) or Isaiah’s with King Hezekiah (over the king’s illness, 11Kings 20:1-11) when God exercised His prerogative to change His mind? The apostle Paul made the issue of the efficacy of prophecies clear for those who care to listen when he said we know in part and prophesy in part (1Corinthians 13:1-12). In other words, no living mortal has the full picture and it will remain so until we change mortality for immortality. As mere mortals, we only know as much as it pleases God to reveal unto us. And it appears to me that most time or some of the time, He reveals bits and pieces to diverse of His instruments. The story is told of an elephant which many blind men were asked to touch from different angles and then describe. A prophecy from God will only come to pass if, in the intervening period, God did not change His mind. Therefore, let no man fret over “prophecies of doom”, as some call them, but go to God in prayer. And let no prophet beat his chest concerning any prophecy. Let no one play God.

I believe in prophecy; it is scriptural. God Himself told Ezekiel to prophecy in the valley of dead dry bones (Ezekiel 37:1-10). Those prophesying should, however, not swear, insist, boast, or give the impression that their prophecy is cast in iron and must surely come to pass. They should also not bellyache like Jonah if God changes His mind and averts negative prophecies. Differing or seemingly conflicting prophecies from different men of God does not necessarily portray God, like Abati wondered, as pantheistic; our God remains monotheistic, no matter what. It only confirms what the apostle Paul said: that we know in part and prophesy in part. Even the prophecies concerning the birth and ministry of Jesus Christ were given in bits and pieces to many prophets over a long period of time.

A Yoruba proverb says “what faces one person turns its back on another” At the University of Ife, my African History lecturer, Dr. Ishola Olomola, as he then was, tried to demonstrate to us the “reliability” of oral history. At the beginning of a two-hour class, he called some of us out, read a written statement to us, and then asked us to return to our seat.

As the class wound down, he called the same set of students out and asked them to recall what he had read to them. Everyone differed in one detail or the other about what they recalled. Imagine, then, when oral tradition or history has passed from mouth-to-mouth for decades and centuries! That was in 1978 or 79 and I might even not have accurately recalled the event here! Let God tell many pastors the same prophecy; let Him show them the same vision, they will still not all recall it accurately – except they carried tape recorders in their dreams and cameras during their vision session! Pray, how many of us accurately remember our dreams? Some may even deliberately add salt and pepper to suit preconceived ideas. That is the nature and limitation of man. Is that not why, as reporters, we are compelled to carry tape recorders!

Did God tell Chris Okotie and Tunde Bakare to run for the office of president and is He the author of confusion? Why did He fail – or why has He so far failed – to make either president? I made bold to say that God is not the author of confusion (1Corinthians 14:33); nevertheless, He could have said so to both and to many more who are yet to come into the open or who may be silently working towards its realization. In God’s own time, not ours, He makes all things beautiful.

I am persuaded that God gives Himself options in anything He does; the example of Elijah confirms this (1Kings 19:13-18). He separates more than one person for an assignment, e.g. Barnabas and Saul or the six deacons, even when He knew from the outset that only one or two will excel (Acts 6:1-6; 13:2). David “chose him five smooth stones out of the brook” but used only one to slaughter Goliath (1Samuel 17:40-51). The Person who gave the parable of the sower sure knows that some seeds will fall by the way side (Matthew 13:3-8).

From the stories we heard and from what we have seen, Okotie and Bakare were close to fulfilling that prophecy – and may still do if God, for whatever reason(s), has not changed His mind and have not replaced them with someone else. “And His place let another take” (Acts 1:15-20). But when there is life, there is hope and no one should write them off yet. Learning from the examples of Daniel, Habakkuk, and the Virgin Mary, though, anyone in pursuit of prophecy must ask “when” and “how” as well as work it out and wait patiently for it (Daniel 10:14; Habakkuk 2:1-3; Luke 2:26-35). Faithful is He that has spoken and faithful is He to bring it to pass. Be mindful that Joseph’s dreams did not come to pass in a jiffy and David was not made king the day Samuel poured the anointing oil on his head.

Finally, I have problems with prophecies when they are cast in iron and when they are made to displace the word of God. In so doing, they become what Karl Marx called the “opium” of the masses, a sedative used to beguile, dull the intellect, deceive, coerce, confuse, confound, arrest, detain, imprison, manipulate, oppress, extort, and impoverish the simple-minded and gullible. Such is sinful.