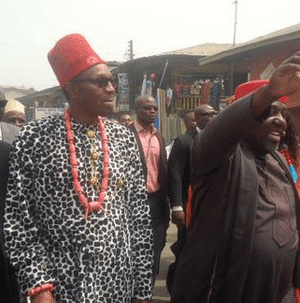 I was born a few years after your reign as Nigeria’s military Head of State from December 1983 to August 1985. Growing up as a precocious child with a prodigious talent for reading every and anything in print, I started to read the defunct Concord newspapers owned by the late business mogul, Chief M.K.O Abiola, at the age of seven though infrequently.

It became more frequent at the age of 10 when my aunt who was living with us at that time secured a job with the Guardian newspapers so she always brought one free copy home every day which I earnestly devoured with pleasure. Quite naturally, I developed a passion for politics and began to have several discussions with my father about the state of affairs in Nigeria. One a certain day, while I was lamenting the inability of past Nigerian leaders to make the country great, my father suddenly interjected and uttered the magical words which birthed the feelings that later transmuted into my extreme love for you:

“The only people who came close to making Nigeria a great country where everything works was the Buhari/Idiagbon regime. They paid back almost all of Nigeria’s foreign debt and those of us who were living in Lagos then, came very close to having 24-hours uninterrupted power supply daily. Though they were poor on human rights, their administration’s War Against Indiscipline and Corruption was on course to making Nigeria a corruption-free nation but they were short-lived in power”.

Instantly, I knew I had found a hero, a mentor and a role model. Someone I could look up to in my quest to see a better Nigeria during my lifetime. I was in secondary school when you joined politics in 2002 and contested for the 2003 Presidential Elections alongside the colourful, vibrant, and bombastic politician, the late Oyi of Oyi, Dr Chuba Okadigbo as your running mate. I did not hesitate to give you my support even though I did not have the franchise. I was laughed at, scorned and was the butt of derisive jokes by my family, friends and classmates because of my support for a man many termed “unelectable”. I was undeterred and continued to support you in the 2007 and 2011 elections with the same cycle of events(with my friends) repeating itself over and over again until mother luck smiled on you in the 2015 elections when you were finally elected as President of the Federal Republic of Nigeria.

Dear President, you promised to do three major things for Nigerians if elected into office: fight corruption, rescue the economy from recession and fight insecurity. You have succeeded in the anti-corruption war by recovering trillions of naira of stolen funds. You have rescued the economy from recession. You have decapitated Boko Haram, recovering territories from the hands of the insurgents. But there is one thing that you lack or have failed to do which not only has the capacity of destroying all your achievements in office or making you lose the 2019 elections but also make posterity pass an unfavourable judgement on your tenure in office as President of Nigeria. This is the issue of insecurity in parts of Nigeria due to the massive loss of lives and destruction of properties by marauding bands of Fulani herdsmen.

I know you are very much aware of their atrocious activities but permit me to cite a few examples. In Benue State, on New Year Day, over 50 people were sent to the great beyond by Fulani herdsmen who attacked several villages and communities. In 2016, in Agatu Local Government Area of Benue State, Fulani herdsmen killed over 500 in a wave of attacks on villages and communities that lasted several days. An international agency once wrote in one of its reports which was made public that close to 6000 people in Benue State have been killed by Fulani herdsmen between 2011 and 2017. The South-east has also not been spared of the venom of this murderous group. Many villages in Abia, Enugu and Ebonyi have been ransacked by the herdsmen with thousands displaced, women raped, properties looted and many lives lost.

Permit me to highlight some of the implications of your silence on the menace of Fulani herdsmen in Nigeria. First is that while you were busy solving the security problems in the core North by fighting Boko Haram, you have deliberately turned a blind eye to issues of insecurity in other parts of the country. It also reinforces conspiracy theories that you are not in charge of the government; that you are a weak, ineffective and indecisive President who has effectively ceded power to a cabal which now superintends over the affairs of Nigeria.

Attacks by Fulani herdsmen in the Eastern Nigeria have served to further alienate the Igbos reinforcing several conspiracy theories promoted by secessionist groups like IPOB and MASSOB. These conspiracy theories include but are not limited to; that you hate Igbos and are hell-bent on punishing them for not voting for you in 2015, that you are out to destroy them at all costs using the Fulani herdsmen and your 97/5 development theory for Nigeria which you allegedly talked about in London is a confirmation of these conspiracy theories. Do you now see the reason why IPOB, MASSOB and other secessionists groups in Eastern Nigeria have cult following alongside several covert and overt sympathizers even among the political class?

Dear President, your predecessors in office did all that they could to fight insecurity in Nigeria even when such acts were perpetuated by criminal gangs who were from the same tribe with them. Olusegun Obasanjo issued the famous “shoot-at-sight” order to security agencies to kill any member of OPC found disturbing the peace in Lagos or any part of Nigeria. Goodluck Ebele Jonathan used federal patronage to silence most of the militant groups in the Niger Delta. The recalcitrant ones among them were silenced by force of arms. Umar Musa Yar’Adua forcefully crushed the Boko Haram rebellion in Maiduguri, Borno State which led to the killing of its leader, Mohammed Yusuf in 2009. Sir, why is your own case different?

I support the call for the immediate proscription of the Miyetti Allah Cattle Breeders Association of Nigeria (MACBAN) and the Miyetti Allah Kautal Hore just the same way IPOB was proscribed by the Nigerian Army and the South East Governors Forum. Time to fish out the criminal elements among them who derive joy from shedding the blood of the innocents and haul them before the temple of justice for immediate prosecution. The security agencies should also be empowered with the latest and up-to-date intelligence gathering gadgets to forestall future attacks by herdsmen on innocent citizens. If you can do all these, it will save me from future shame and embarrassment from family and friends who taunt me daily about the inability of our president to bring an end to the violence perpetuated against innocent and defenceless civilians. Thank you sir for taking out time to read so long a letter. I still love you.

[About the author: Akus, a blogger writes from Ifo, Ogun State.]

A Country That Can’t Provide Jobs For Young Citizens Is Virtually At War Against The Future
Did God Tell Chris Okotie And Tunde Bakare To Run As President? Why Did They Fail?