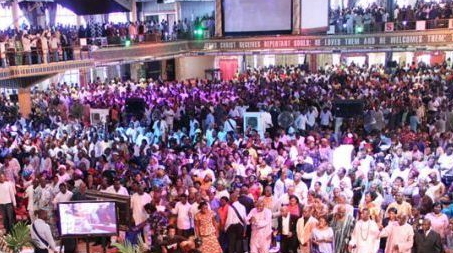 Recently, a Nigerian caused an upheaval in the body of Christ here when a video of the interview he granted on whether or not tithing is Biblical went viral.

That such an issue went viral has a lot to do with a Nigerian Church that, to a large extent, is now materialistic and rather than provide leadership, is now deviating from the crux of Jesus’s message.

A lot of people, though dissatisfied with this trend, are afraid to speak their hearts for fear of ‘…touching God’s anointed…’ reason why many of them filed behind the young man at whose behest the tithing issue came up.

Another result of a materialistic Church is a situation in which we now have ‘Daddy GOs’ who compete with each other for ownership of large auditoriums, more members, exotic cars, private jets and universities and are now totally oblivious of the Jesus spirituality.

What we hear today are more of the words of men rather of God.

Yet, I believe it is never too late to make a U-turn.

From the day men began to beseech the heavens, many men have cited God’s directive to gain legitimacy for many of the things they do in His name even though their true motive is self-centeredness.  And over time, we have seen a few examples in Nigeria.

A prominent Bishop once warned Nigerians against criticizing him for setting the fees of one of his universities at almost a million naira, saying a ‘critic was smitten with a strange mouth odour over the act’ by God until he intervened and the individual obtained pardon.

Long before him, having divorced and re-married a number of times, another prominent pastor declared that God had told him he would become Nigeria’s president at a particular time, and even went on to allude to that in one of his books. Till date we are still waiting.

Having been involved in a scandalous divorce, another pastor declared that ‘…there are preachers and there are men of God…I am a man of God…we are not working in sin…’ In other words, even though he may have counseled hundreds of his members against divorce, it was ok for him to do so.

Having endorsed the discarding of simple building rules which led to the collapse of a building in his church premises that killed many foreigners, we saw a pastor turn around to blame some UFOs for the disaster. The same pastor predicted a win for Hillary Clinton in the last US election, and when the results were released, we got a different interpretation of his prophecy.

We also heard a pastor predict the death of a sitting president before he left office in this country and yet that president ended up doing his two terms of eight years and attempted a third term.

There is yet another one who, till today, has left his members hanging on a cliff as to his choice of a successor, declaring that God has asked him to wait. Feelers are that if he chooses a family member, the strong men in his church would kick. If he chooses a church member, where would that leave his family so, to stay on the fence and allow maybe time to solve the problem, he declared that God had instructed him to wait.

Truth is, some of these clear eviations, though proof that some of our ‘GOs’ are smart, does not speak very well of our discernment and Biblical knowledge as a people. But it does indicate the contradiction that is the Nigerian situation and proves without need for any empirical study that somewhere at the core of the Nigerian religious experience, something exists that may be profoundly opposed to rationality.

Must these men ascribe every word that fall from their mouths to God?

The ongoing battle in the name of God to control the minds of Nigerians only serves to undermine the intelligence of worshipers and profit some people.

Everybody is accountable to God first before any church or pastor. And everybody has the responsibility to know to personally know what Jesus actually taught as found in the Gospels.

Going by the level of moral bankruptcy in this country, placed side by side the upsurge in churches in recent years, only makes our lip service is obvious.

Jesus explicitly warned that man cannot serve God and mammon -the god of money. That it is easier for a camel to go through The Eye of a Needle than for a rich man to enter God’s kingdom. He is on record has chasing the money changers from the temple. He was even quoted as saying ‘do not lay up for yourselves treasures on earth’. The term ‘lay-up’ as used in the verse refers to not allowing one’s possessions possess one. Jesus was here clearly warning against excessive materialism and greed.

Saint Thomas Aquinas warned against excessive greed as Apostle Paul admonished that the love of money is the root of all evil.

As ‘the light’ and ‘salt’ of this nation, the Church is supposed to get involved in the problems facing this nation, and speak out against inequality in the system. It is her duty to care for the poor and give guidance to the lost. How can a materialistic Church in a country where many citizens live below two dollars a day function as such?

Yet we see Bishops who own private jets and universities, whose family members runs their churches, who sits on billion naira business empires yet do not pay taxes, and do not have a clear program for helping poor people both in their churches and society.

It is on record that the Nigerian Church earns over N5 trillion annually from tithes, offering and other churches business, yet PFN and CAN for years struggled to build a simple Ecumenical Centre in Abuja.

As I write, countless Christians in the North are experiencing untold poverty, and added to that, they are facing unprecedented persecution and atrocities, especially at the hands of the Satanic group Boko Haram. And yet it is mostly NGOs from Western countries that raise money for some IDP camps with mostly Christian population in the north.

Nigeria’s Christian population is more than half the total population of the country, the largest church auditoriums in the world, largest number of churches and pastors in Africa are all here, yet what do we get?  Rather than a church that protects the sheep, evangelizes the lost, and speak truth to Authority, we have a clergy so lost in materialism that one of them recently called for the arrest of every ‘daddy GO’ including himself.

He said Nigerians should ask them where they get their stupendous wealth in the face of biting poverty, stating that if it is not from church members then it is certainly from corrupt politicians.

I am not against pastors being wealthy, or asking them to take up the role of government, no.

My question is…of what importance is the wealth of the Church if as we speak  -according to global statistics- Nigerians are hungrier today, are the third most terrorized country in the world affecting mostly Christians in the north, and over 600,000 youths flee our shores annually. Then to add that the level of corruption in high places today is unprecedented.

As ‘the light’ and ‘salt of the earth’ what leadership is the Church providing?

As we celebrate Jesus this season, both clergy and laity, let us call to question those actions that clearly fail to take notice of the suffering of fellowman, and ask ourselves, if it were Jesus, what would he do?

Jesus said ‘whoever is generous to the poor lends to the lord’ and that love for God and fellow man is the greatest commandment. This should be the focus going forward.

This is not to say we don’t have a Mike Okonkwo, Tunde Bakare, Cardinal Olubunmi Okogie, Prelate Ola Makinde, Ayo Oritsejafor and the ever eloquent father Matthew Hassan Kukah, who are daily speaking truth to power, what we are pleading is for more men to come forward and join these men, and for Christians in Nigeria, in the name of God, to unite and do the needful for the good of this country.

May this Christmas and many more to come, usher us into the Christ-consciousness, and may it cause us to realize that in the end, it is our love for God and fellowman that really matters.

About the author:  Albert Afeso Akanbi is a Novelist, Researcher, Columnist and Humanitarian. He lives in Abuja FCT, Nigeria.

4 thoughts on “Christmas And The Body Of Christ In Nigeria”