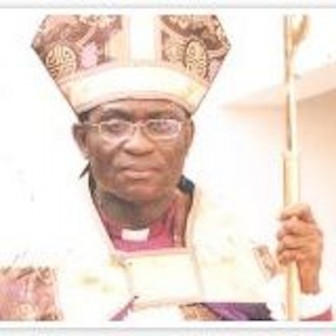 Around 11:30pm on Friday night, Most Rev Ignatius Ogboru Kattey was kidnapped by some gunmen in Rivers State’s capital city.

The presiding Bishop of Niger Delta N. Anglican Communion of Nigeria and his wife Beatrice were abducted very close to Aleto bridge in Eleme LGA of the state.

The kidnappers later released his wife but the fate of Bishop Kattey is still unknown.

According to sources within the church, Bishop Kattey and his wife were driving to Port Harcourt late Friday night in a bid to beat the early morning traffic on Saturday morning before their abduction.

Insecurity has become a major challenge for Port-Harcourt residents. Just this past week, Rivers State Sports Commissioner Mr Felix Igwe was shot by some gunmen around the Eleme axis of Port-Harcourt. He is still clinging to life at the hospital.

He attended St. Paul’s Catholic School Obigbo (now Oyigbo) from 1954 to 1959. For his secondary education, he attended the National High School Aba and graduated with a Grade One in West African School Certificate Examination.

He had his university education at Ahmadu Bello University Zaria (beehive of Academic excellence) where he graduated in Mechanical Engineering in 1976.

Arch. Bishop Kattey was born-again in 1971 through the ministry of the Scripture Union. He is the Chairman, All Anglican Clergy Conference of the Church of Nigeria (Anglican Communion) and also the Chairman of Christian Council of Nigeria, South South Area Council.

May God deliver him from his kidnappers.