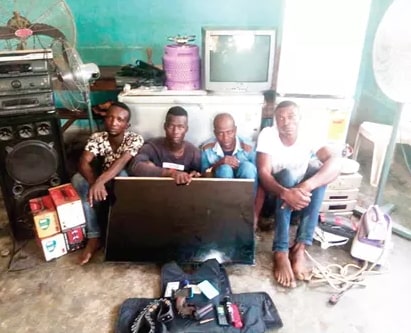 4 suspected robbers, who allegedly specialized in robbing churches and other places of worship at Awa Ijebu area of Ogun State have been arrested.

The suspects, 43-year-old Akinniyi Moses aka Canjour, 23-year-old Ogunfowoke Kayode , 35-year-old Michael Idogun aka Head Boy and 29-year old Izunna Odah, were arrested following a series of complaints from the churches they have attacked.

Following the complaints, the state Commissioner of Police, Ahmed Iliyasu, directed the Divisional Police Officer (DPO) of Awa Ijebu to go after the armed robbers.

The DPO, a Superintendent of Police (SP) Olu Monday, in compliance with Iliyasu’s instruction, briefed his men to embark on intelligence-based investigation in order to get those behind the robberies.

The state Police Public Relations Officer (PPRO), DSP Abimbola Oyeyemi, said the detectives’ efforts paid off after they received a tip-off from a concerned Nigerian. The suspects, during interrogation, confessed to being responsible for the attacks on churches in the area.

Some of the churches the robbers claimed to have robbed are Methodist Church, Oru-Ijebu; Love of Epistles Church, Ago-Iwoye and a building at Ajebo in Oru-Ijebu.

Oyeyemi, however, said that Iliyasu had ordered that the suspects be transferred to the Federal Special Anti-Robbery Squad (FSARS) for discreet investigations.