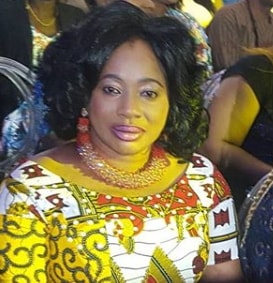 Veteran Nollywood actress Clarion Chukwurah who relocated to the US three years ago has returned home to make movies.

Here is what the actor told The Guardian in a recent interview:

“I’m back home to do some movies.I will be in Owerri to shoot and then back to Lagos to shoot another series. I’m looking forward to Amina premiere later in the year. I missed Nollywood a lot in the three years I have been away. I can’t wait to get back into it.”

On her assessement of Nollywood, the actress said:

“Well, Nollywood has evolved back to the cinema culture, forced by piracy. So, the new Nollywood is stronger than the old Nollywood. The old Nollywood veers more into making TV series for Mnet chain; there are so many AfricaMagic channels now than when I left. I see not much of an improvement in the craft because you have a lot of untrained young people in the industry, but I also see some meaningful improvements in that Nollywood stars now get endorsements. Before I left only the hiphop stars were getting endorsements. There is improvement in that direction.

“So, old Nollywood is not improving, but new Nollywood is improving because of the cinemas and a lot of young people are getting trained from outside and within the country to improve their craft. Kudos to new Nollywood, but I say old Nollywood, kudos to you, too, but you need to buckle up.”She expressed delight at what women have accomplished in Nollywood, saying they have been good students in following the strides of older actors life herself.“I’m very happy that there are a lot of female directors, producers, continuity, sound now; it’s very heartwarming,” she enthused. “I give people like myself a pat in the back because I know that I, along others, were role models for them to go to film schools. I have produced in the past. Now, my work will be more focused on improving the quality of life through my consultancy and advisory work.

“I did not go to the U.S. to go into Hollywood. I went there to pursue the Clarion Chukwurah Foundation initiative for which I got recognition in New York City and other cities. My work in my industry is going to be secondary right now. My work in my industry made me who I am; it created the foundation, the platform, the springboard for who I’m evolving into today.”

Chukwurah’s next project will be a cross between Nigeria and her husband, Byod’s America, and the possible deeper bilateral partnerships it could engender between the African homeland and its descendants scattered all over the world through the instrumentality of slave trade.

“Yeah, you did ask me if I would be producing or directing (a movie) in Nigeria. Yes, I will. I am working on a project. I will be the artistic director and Clarence Peters, my son, will be directing it. It is a movie I spent time doing a lot of research on. Well, I will say two of them really. I did the research for the first one in the U.S.; the second one some couple of years ago in Kenya. The one in the U.S. is coming first because of its historical importance and relevance to this country, Nigeria, and how it can bring us together, Nigeria and the U.S. It is amazing that Nigerian government doesn’t seem to be aware of it as something they can use as a plus in the country’s foreign policy relationship with the United States of America.

“It is a story of some 75 Igbo men, women, and children, who were taken as slaves from the place known as new Calabar, which is Port Harcourt. The ships sailed from there and landed in my husband’s hometown, Anthony Boyd, in Savannah-Chatham County, Georgia, and they were sold to two masters, who were from another country. And sailing from Savannah County to Saint Simon’s Island, an hour drive but back then in 1803, it took more than that. Between Chatham County waters and their destination, they overpowered the overseers, killed them and wrecked the boat’ on the marshes of Damba Creeks. And they all got down into the water; they didn’t have ships to go back home; they didn’t know how to do so. What they just did was that they held each other by the hand and waded into the water and they were singing: ‘The water brought us, the water will take us back!’ And they drowned; they committed mass suicide!”

Chukwurah noted that that action not to yield to slavery is a milestone still celebrated in that part of the U.S.“

“Now, from the State of Virginia all the way to South State of Carolina to the North State of Carolina to the State of Georgia, this is a very important history in the history of America that is taught in schools, which African-Americans are so proud of, and it makes them consider themselves as Nigerians. Every African-American from Virginia to North Carolina to South Carolina and to Georgia, they will tell you ‘we are Nigerian and Igbo because of that story,’ because it is a thing of pride. They were those that said ‘no!’ Not everybody bowed to this slavery. We had some people who had some gumption in them. That is the story I am making this movie project on, that I will produce. African-Americans are dying to know how was it here? How did it happen? I did my research over there and where they landed, where they were kept and housed.

“We are working on endorsement for the project, funding for the project, that is what we are working on now.”Chukwurah maintained that the horrors of betrayal that African-Americans feel is still raw till now, as there has been no atonement, centuries after, for the crime of brothers selling brothers.“There really ought to be stronger relationships, ties between Africans in the homeland and African-Americans. They want it but we are not doing enough. Well, the thing is, when you look at the human angle, when you look at what we did to them, what our forefathers did to their forefather, think of how they feel. My husband is an African-American and I relate more with African-American families; so, I got to know them. I got to feel them, feel their soul. And I hurt because I see everything that they went through. It is so sad.

“Yes, our forefathers were forced at gunpoint, but that was initially. After that it was very voluntarily; it was business. It was very much business. That is why there is so much corruption in our countries. That is why black African countries have not gotten it together because there is so much selfishness and greed. A man who can sell his wife and children for money, not really money, for articles; that is still happening today. So, when they (African-Americans) look at you (Africans in the motherland), they see in you that man who is heartless, who sold his brother. I think we need to do more and not expect them to do more. We have to have some conscience, hold some kind of events to say ‘we are sorry!’ We never apologised. Who does that? So what they see is: ‘after selling us as slaves, you people still can’t get it together?! You are coming here because your own countries are messed up, to come and marry us so you can get the papers, so you can live here and then divorce us!’”

The second film project Chukwurah has is about human development and it will be shot in Kenya. According to her,

“We are working on funding, endorsements. We are looking for collaborations with production companies and funding because you know, like in the U.S., they don’t have one company making a movie; they have collaborations. So that is how this is going to work.”