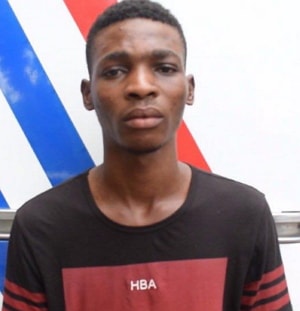 A phone thief who was captured in a viral CCTV footage currently circulating on the internet has disclosed that he was propelled to steal an iPhone 8S in a retail outlet in Ikeja because of the need to pay his school fees.

The suspect, Timilehin Olaniyi, who was captured in a trending CCTV footage disclosed that he was desperate to pay his school tuition fee of N80,000, hence he stole the iPhone 8S.
Olaniyi, a 200 level student of DS Adegbenro ICT College, Ogun State noted that he was in Computer Village, Ikeja on 16th February, 2018 in the morning to dispose off an iPhone 5s given to him by his course mate to enable him raise money for his school fees.

The suspect who was tracked and arrested in Wasimi, Ogun State by the Decoy Team of Rapid Response Squad said

“I was in Lagos on the invitation of a close friend. He is aware that I was struggling to pay my school fees, so he gave me an iphone 5s to sell in order to raise money.
“So I went to Computer Village to sell the phone. When I entered the phone store, my plan was to know the price of Iphone 7s but it was not available. I noticed that one of the attendants went out leaving behind an Iphone 8s on the table.

I don’t know what came over me. I monitored the other attendant and I went away with the phone. I never knew I was captured by the CCTV camera. I sold that iphone 5s to pay my tuition fee while I started using the iphone 8s”.

it was about the second day that the friend I was squatting with sent me packing from his house over a CCTV footage circulating on the internet of a phone thief. He said I was the one.

Source stated that Olaniyi failed to open up to his elder brother who saw him spotting a T-shirt he bought for him in the video.

The brother had gone to engage the services of a lawyer for defamation.
The suspect was arrested few days later in Wasimi, Ogun State.

[Official Press Statement By The RRS]