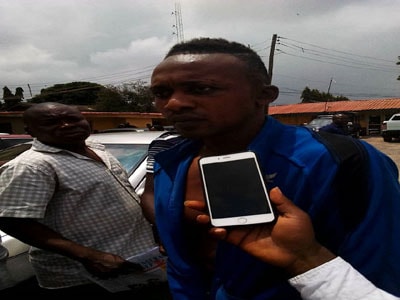 Solomon James, a driver who recently lost his job has been arrested by the police in Lagos for allegedly robbing his former boss, Utchay Odims.

The suspect claimed he only wanted to inform Odims’ wife about his extra-marital affairs.

According to police, the suspect had the intention of defiling the victim’s wife, who, fortunately, was not at home.

A source said last Saturday, the suspect reportedly scaled the fence of the victim’s house, entered, tied the maid and the man before robbing him.

“I ordered the maid to tie her boss. Then I tied her. I asked my former boss who else was in the house, he said no one, as his wife had gone to church. I said I would have loved her to be around so that she would witness what I was doing.

“I did not go there with the intention of harming anyone. I wanted the wife to be around because I wanted to expose her husband. When I was his driver, he engaged in extramarital affairs with university girls.

“That was what I wanted to reveal to her. I told him ‘since your wife is not here, I cannot go home empty-handed’. I told him to give me something and he said he had little cash at home. He tried to make transfer, but the network was bad.

“So, I asked him to give me the money in the house. We went to his room and he gave me the money. He did not recognise me because I wore a face mask. I asked for his ATM and pin since he could not transfer money to my account. I asked for his car to drive out and I promised to drop it where he would locate it.

“I asked for the original documents of the car. Initially, I did not come to rob him, but it ended up being a robbery.

“I did it because he refused to pay me. The agreement was that he would pay me N80,000 per month, but he couldn’t afford it and reduced it to N5,000 each time I drove him.”

“The suspect jumped the fence and was trying to escape, but operatives nabbed him.

“The complainant said he forced himself into his house and demanded his ATM card. He said the suspect became aggressive when he could not transfer the money due to network failure and he forced him to surrender his car key and original documents.

“The suspect asked for the victim’s wife, with the intention to defile her, but luckily she was not at home. He collected N38,000.

“When the operatives got to the scene, the suspect jumped the fence, but he was arrested.”

Africa Magic Nollywood Stars Pop Up Channel Now On DStv Channel 198 & GOtv 29
“When Father Decides To Sleep With His Own Daughter, I Think The World Is Coming To An End” – Police