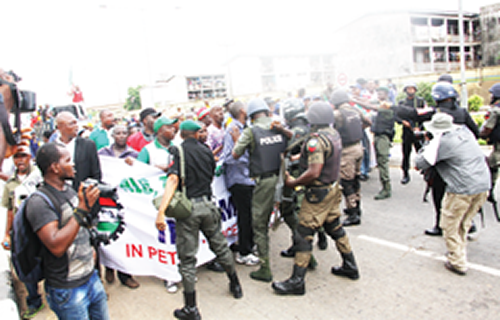 On Wednesday area boys hijacked the protest by Nigeria Labour Congress (NLC) and unleashed mayhem on the protesters in Lagos. This came despite the security measures put in place by the police to protect public and government facilities ahead of the planned strike by the NLC. Witnesses said the mayhem started around 7am at Fadeyi area when the hoodlums from Mushin, Bariga and Somolu area hijacked the protest.

The protest was to register workers’ grouse against the hike in fuel price by the Federal Government. It was learnt that the hoodlums had blocked the entire stretch of Fadeyi, forcing motorists heading towards Ojuelegba to turn back and people to run helter-skelter. 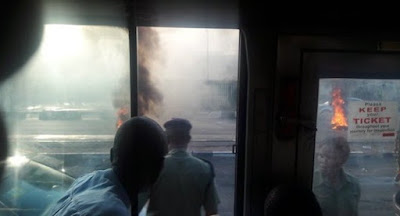 Some of the hoodlums were said to be armed with dangerous weapons such as machetes and axes to attack and rob some of the motorists. It was also learnt that no life was lost but some pedestrians and motorists sustained injuries, while several cars parked on the road were vandalised.

About 9am, some anti-riot policemen were deployed in the area, but their attempt to quell the situation was rebuffed by the rioters, who pelted the policemen with stones. However, but the arrival of some soldiers from Abalti Barracks, Ojuelegba, to area calmed the situation.

Collaborating with the anti-riot policemen, the soldiers were said to have used tear gas to disperse the rioters. Speaking with our correspondent, Mr. Olufemi Momo-du, a resident of the area said the people were going about their normal business about 7am when the protest started.

He said: “Although it started peacefully, we were surprised it even held. This is because we heard on the radio that the Industrial Court banned the strike. Also, the Lagos State Governor, Akinwunmi Ambode, asked us to go about our daily activities without fear.

“So imagine our fear when some of the area boys that have been constituting nuisance in our area joined the protesters. “On my own part, I closed my shop because they were already vandalising people’s shopd and looting their goods. They held our area hostage until the police and soldiers arrived the scene.”

The riot was said to have caused gridlock on Palmgrove and Yaba ends of the road to Maryland Bridge.