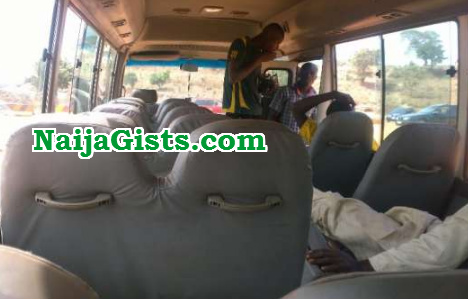 May 18, 2016 – Tragedy As Abuja-Bound Luxury Bus Driver Runs Over Passenger In Ojota Lagos

Gabriel Eze, a 56-year-old bus driver has been arrested for killing one of his passengers.

The deceased was reportedly pushed off the Abuja-bound luxury bus by the driver and his motor boy before he was crushed to death.

Trouble reportedly started at about 11:00pm at the Bonny Way Transport Office in Jibowu where two passengers fought over sitting positions.

We gathered that while a passenger with valid ticket came to sit on a chair allocated to him, the deceased was already occupying same, claiming it was his seat.

The argument lingered till the bus got to Ojota, prompting the driver to park in order to settle the feuding parties.

All efforts to get the man without ticket to vacate the seat for the other passenger failed, and the driver alongside his motor boy allegedly pushed the man off the bus before crushing him.

Gabriel Eze reported the matter to police at Ogudu station before he was arrested and transferred to Panti Yaba.