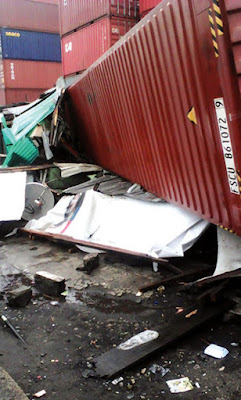 The General Manager of LASEMA, Mr Akin Akindele gave the advice in a statement he issued after a container killed a lady simply identified as Ezinne at Sifax Container Terminal, Ijora, Lagos.

He said that two other men sustained injuries when a container fell on adjoining illegal shanties during the relocation of containers within the premises at about 5.30 a.m. on Thursday.

Akindele said that the agency’s assessment indicated that operational activities were carried out without flood lights and operational safety procedures.

He said that the injured persons had been treated by the Lagos State Ambulance Service (LASAMBUS) while the corpse had been deposited at the Mainland Hospital mortuary.

He added that further investigations into the immediate and remote causes of the accident had begun.