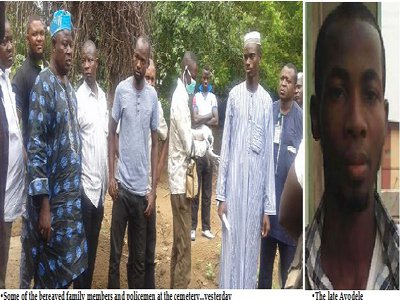 The corpse of a tailor allegedly shot dead by a trigger happy police DPO attached to the Ijeshatedo Station has been exhumed from the cemetery.

Late Jamiu Ayodele’s body was yesterday exhumed from the cemetery and taken to LASUTH in Ikeja for autopsy on the order of Lagos Police Commissioner.

Ayodele was killed around 7:30pm on May 7 during the birthday party of one of his friends.

His killer Ijeshatedo DPO Muhammed Yakubu was only queried and released.

The case has been reopened after his family demanded justice.