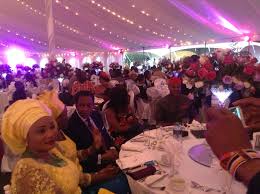 A jilted man caused chaos during a wedding ceremony in Ukala Okpunor, Oshimili North Local Government area of Delta State this past weekend.

The man simply identified as Teddy reportedly stormed the wedding venue of his ex-girlfriend and shot her and her husband dead before going further to shoot sporadically at the guests including the mother of the bride on Saturday the 31st of January 2015.

The trouble started after the couple’s first dance. The bride identified as Stephanie, graduated from one of the top polytechnics in Delta state.

After her graduation, she reportedly walked to her ex-boyfriend, Teddy and told him she is tired of the 8-year courtship that has not lead to the altar. Sources disclosed that her intention was to force him to propose to her but Teddy was taking his time since he just secured a job.

Because of Teddy’s inaction, Stephanie called it quit quietly while Teddy was planning to settle with her.

In December 2014, a UK-based businessman came home looking for a wife and was introduced to Stephanie by her mother.

Desperate to settle down, Stephanie sees the man as God sent and welcomed the idea since virtually all her mates were married.

They started plans to tie the knot as soon as possible without any knowledge of the unforeseen danger ahead.

Unfortunately the couple were shot dead by Teddy who stormed the wedding venue with AK47 riffle halfway into the wedding ceremony.

Teddy is currently in police detention as the family of the deceased couple and wedding guests mourn their loved ones.