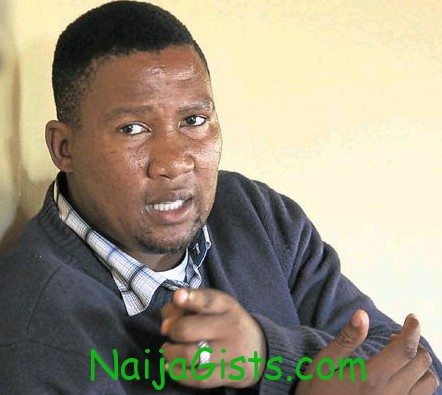 A Johannesburg court has issued an arrest want for Mandla Mandela the grandson of Nelson Mandela after failing to show up in court for refusing to pay maintenance money for his first wife,Tando Mabunu-Mandela . naijagists.com

According to City Press report, a maintenance investigator stated Mandla Mandela had refused to accept a summon given to him on the 11th of July, 2012.

The court granted an order to deduct the sum from Mandela salary, and issued the arrest warrant after his failure to appear in court, the newspaper said.

Mandla Mandela, 38, is going through a complex divorce with his first wife. He has drawn wide attention for marrying two other women apart from her in recent years.

While polygamy is legal under tribal law, a man cannot have different wives under both tribal law and under civil law. Mabunu-Mandela has appealed successfully to the courts to rule against the other marriages.

Mandla Mandela has also garnered headlines after neighbours accused him of expropriating village land to build a luxury hotel and sports stadium, and a court had to order him to release journalists he held hostage when they investigated the allegations.

Nelson Mandela, now 94, was elected the country’s first black president in South Africa’s first all-race vote in 1994 and served one term before stepping down in 1999.