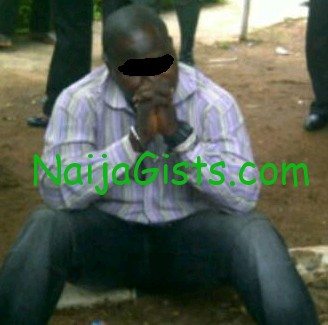 A man identified as Akpotejere Osuna has been arrested in Delta State for killing his step-daughter‘s 8-day old baby daughter for ritual. naijagists.com

We learnt Osuna, 39 killed the baby of his step-daughter who came to visit her mother for post-natal care.

Osuna confessed to Delta state police officials that he killed the baby. He said he took the baby from her mother’s side while she was sleeping then took the baby to a nearby bus where she was slaughtered.

According to Delta State Police spokesman, Charles Muka, Osuna was arrested at Jese Town where he allegedly removed the heart, tongue and other vital parts of the baby after killing her.

“The suspect sneaked into the house of the mother of the baby, took the baby into the bush where he murdered the child, cut of the heart and the tongue, wrapped them in a polythene bag, pocketed them and melted into the bush.”

Mr. Muka disclosed that upon report, the suspect was traced into the bush where he was arrested, adding that “he confessed that he was taking the parts to Ghana where he was going to make use of it for money making ritual.”

Haba the heart of man is desperately wicked who can know it?

This man is a wicked man. Imagine the innocent baby