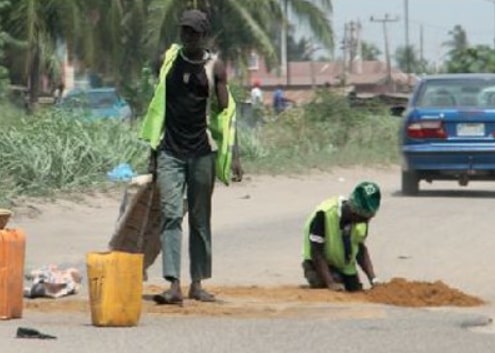 By Simeon Akusu, The Nation

They are partners, one a cripple and the other, able-bodied; and their job is to fill up bad spots on the Badagry axis of the Lagos-Badagry Expressway, for gratification from appreciative motorists. Simeon Akusu spent time with them.

MUHAMMED is a disable young Nigerian who has refused to be liability onto himself and community. Together with his unemployed partner, Hamusat Ibrahim, he has decided to impact on his environment in his own way, making up for the almighty federal government, where it is visibly failing.

Though of Northern Nigerian origin, but resident in the Muwo/Badagry axis of Lagos, Muhammed, a cripple and his partner, Hamusat, have over the past months taken it upon themselves to fix the dangerous potholes and craters that liter the now collapsed Lagos-Badagry Expressway.

In effect, they have eased the headache of motorists and passengers on that axis. In return, the beneficiaries have reciprocated in cash, dropping them naira bills of various denominations, which have in turn become daily earnings and means of survival for the men.

And this, they have been doing with mere sands, broken stones and shovels.

Speaking with The Nation, Muhammed said the idea was birthed during the rainy season when they usually pack sand from road side and distribute to people whose home, shop or street suffer erosion.

Most times, all they needed were sacks for bagging the sand, shovels and a wheelbarrow. It was from there that they graduated to filling up bad spots on the busy highway.

According to some commercial vehicle drivers spoken to, the two men started the exercise around June 2018.

“The guys probably devised this method, when they realised that begging for alms was no longer lucrative. I think they started working on the express about 10 months ago, when they realised that demand for their previous service of filling up erosion spots was no longer in high demand and people were no longer giving alms like in the past. But people appreciate their present vocation, and road users, both private and commercial, reciprocate by giving them stipends.”

His partner, Hamusat, however said the major challenge they are facing is the police. “Most times, the police come to stop us, but we don’t give up, because we know we’re not committing any crime and what we’re doing is beneficial and may even save lives.

“Because we work in the sun, sometimes, we develop fever. That is the only other challenge, but we take care of that with agbo (herb mixtures) and get stronger.”

Another thing that this reporter observed is that the two men hardly stay in one place. On finishing with a spot, they move further up to another bad spot and another. Sometimes, the rain comes and wash off their effort at spots they had already worked on, and they move back to fill it up again.

Just as one began to wonder if the men have any relationship or filial commitment, one of them picked a phone call and this reporter soon overheard the familiar Hausa word for spouse, yanrinyan.

Asked if he is married or in a relationship, he smiled and nodded slowly. “I have a wife and kids. That is why I work tirelessly to put food on their table. That’s why I take so much risk,” he said.

However, with the recent moving of heavy road construction equipment to MTN/Mosafejo area of the expressway and bits of grading taking place, it looks like these gentlemen may in months be out of work. The rumour is that the government has awarded contracts for repair of the road.

What then would be their means of livelihood? This reporter asked.

“Until then,” Muhammed said, shrugging his shoulders, “we’ll keep doing what we’re doing.”