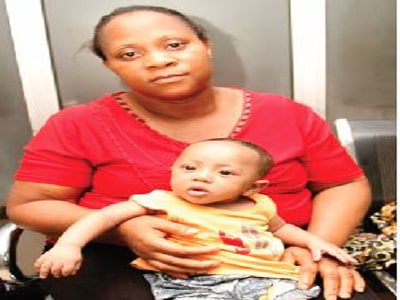 March is internationally acclaimed as one to celebrate and roll out the drums for women, but for Rachel Nasiru, mother of six-month old David, the word celebration may just be the last in her dictionary.

Her heart is in turmoil. And the reason is that her only son, David, has a hole in his heart and urgently needs surgical intervention.

It is on account of this that her heart sinks daily, as she watches her little boy gasp for breath on a daily basis.

You ask what could be wrong with the child and her responds is: “I don’t want my baby to die.”

She heaves a deep sigh and begins her sad story.

“You can see the way he is breathing; it gives me great concern to see him like this.”

Little David was born with a hole in the heart and from the moment his condition was diagnosed, both his parents have been running helter-skelter to save his life.

“Apart from the hole, the cardiologist attending to him at LUTH says he has other complications. Two of the valves, one carrying blood to the lungs and the other carrying oxygen and blood to the body are narrow and they need to be expanded.”

Rachel recalled how it all started:

“He also has several holes in the heart, which needs to be blocked. It was detected from birth. Even before his birth, I went through Caesarian Surgery (CS) and the reason for the CS was because in one particular test I undertook, they found that the water inside me was short.”

The hospital had to quickly conduct emergency surgery on Rachel to bring out the baby.

“It was from that labour ward that they transferred him to NNU (Neo Natal Unit), where he was taken care of. He was under oxygen for over two weeks to stabilise him because when I gave birth to him, he had fast breath and he was almost green, probably because he was short of oxygen. So, they quickly placed him on oxygen and also treated him for jaundice. We were there for about three months before they now referred us to the cardiologists department.”

There, the first x-ray was conducted and it was discovered that the boy had a hole in the heart and some other complications.

“I can’t totally analyse the report but it showed that he had all this complications that I have been talking about.”

She paused for a while to stabilise her emotions and then continued:

“They said he has to undergo surgery for it to be corrected before he clocks one year, and that they cannot do it before he is six months. They actually gave us a referral to Babcock University, where they have a cardio section. They do it in several places but LUTH referred us to Babcock. They also said that if we have the resources, we can take him to India but that it is cheaper to take him to Babcock.”

To buttress her point, Rachel handed over a copy of her son’s medical report dated 4th January, 2019, which read:

“The above named male child is a known patient of the pediatric cardiology unit of the Lagos University Teaching Hospital, Idi-Araba. Clinical evaluation indicated that David has symptomatic congenital heart disease, which was confirmed by echocardiography to be Pentalogy of Fallout. David will require further cardiovascular and possible open heart surgery to correct his heart defects in order to forestall irreversible and life-threatening complications.”

“The money that is required is about three million naira. That is just for the surgeries alone, he also needs to run some test and do some examinations that is not part of it. Please, we need financial assistance to help my son. I plead with well meaning Nigerians to come to our aid. At the moment, I am not working.”

“My husband works in the hospitality industry, that was where we met and we have two girls before David. I was working at Four Points Hotel but had to resign because of my baby’s condition. You know the way things are at LUTH, when you have to run this test and move from one place to another. It can be so frustrating. So, I had to resign,” she said, helplessly holding back the tears.

Life after quitting the job and caring for her baby has been really tough.

“My son is on medication to help him with breathing and I believe that God would make a way for the funding his surgery.”

On his part, Oluwole Nasiru, father of boy is also hard hit by the trauma that his son is going through. He talked about some of the efforts he has made to save his dear son but all his efforts haven’t been successful.