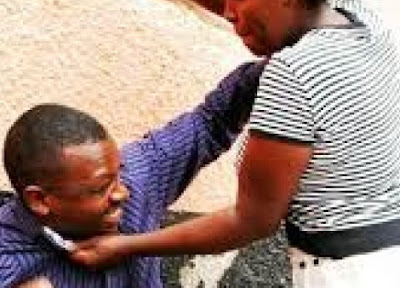 Sept 6, 2016 – Mother Of 5 Arrested For Beating Husband To Stupor In Agege Lagos

Fausat Salaudeen, a 38-year-old mother of five,appeared in an Ikeja Magistrates’ Court on Tuesday for allegedly beating and tearing her husband’s clothes.

Fausat, a resident of Agege Area of Lagos, is being tried for breach of peace and assault, which she pleaded not guilty.

The Magistrate, Mr A. A. Adesanya granted bail to the accused in the sum of N20,000 with one surety in like sum.

Adesanya remanded her in prison custody pending the perfection of her bail conditions.
Prosecutor George Nwosu said the accused committed the offence on Sept. 4 at her residence.
Nwosu said the accused assaulted her husband, Mustapha by beating and tearing his clothes into pieces an act which the accused had been doing from inception of their marriage.

“The accused always fight the complainant on any trivial issue. Anytime they have disagreement, the accused is always the first to hit him.
“The complainant had on many occasions have her arrested by the police, but when the police were tired of the case, they transferred it to welfare, but the accused still refused to change,” he said.

The prosecutor said that on that fateful day, the complainant ordered the accused not to cook inside the room but she disobeyed and started cooking.

“As the complainant carried the cooking stove to take it to the kitchen, the accused dragged him back and descended on him by beating and tearing his clothes,” he said.

The offences, the prosecutor said, contravened sections 166 and 170 of the Criminal Law of Lagos State, 2011, which attracts a year imprisonment on conviction.