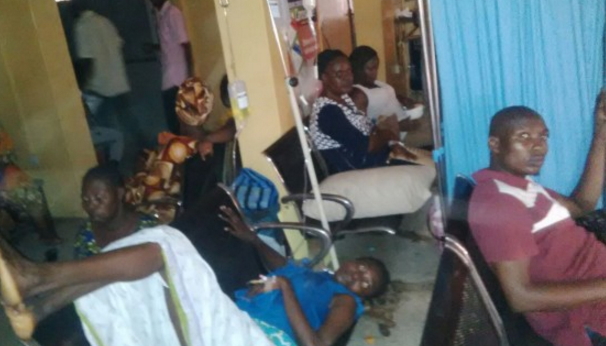 Doctors, nurses and patients in the various wards of the Orile-Agege General Hospital in Lagos, Nigeria, Sunday night were stabbed by thugs who invaded the hospital in protest against the treatment of their perceived enemy.

The thugs invaded the hospital at about 11 pm just after doctors had treated the man simply called Taye.

They stabbed workers, patients and took away belongings including handsets and money of their victims.

The thugs also invaded the engineering department, and the office of the drivers, where they stabbed some of the staff.
A parent, who brought his daughter to the hospital was also stabbed.
The parent said when he was attacked, he told them he was a pastor and he was freed. But others were not that lucky.

A nurse, who does not want her name published, told our correspondent that the thugs invaded the hospital because they wanted their earlier victim dead and not treated.

They were angered when doctors saved his life.

“They wanted the man to die at all costs, but our doctors attended to him just to save his life.
“However, we suddenly saw the hoodlums invading the hospital with machetes, broken bottles and other weapons and started attacking everyone they came across,” she said.

It was gathered that a doctor who went to the children ward to hide from the hoodlums was so unsettled that he could not attend to a child, who was said to be in need of urgent medical attention.

Sources said that it took time before security men went to rescue the occupants of the hospital from the invading hoodlums.

Some old men securing the gate of the hospital were not spared. They were beaten mercilessly.
An observer recounted that the hoodlums attacked motorcycle riders and passersby on the road leading to the hospital.