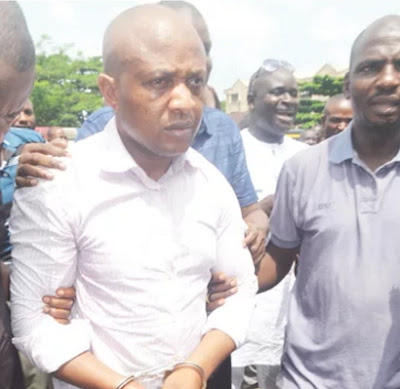 According to some natives of Nnewi, the Ikenga had told the kidnappers their end was near whether they left him or not.

A native who refused to be named said: “Two days after the Igwe and his chiefs went round the communities with Ofor Nnewi (staff), a house, where the kidnappers usually held their victims hostage in the town was exposed. The house is near a prominent politician’s house but no one knew something like that was happening there.

“One afternoon, the man in charge of the house started acting like he was insane. He left the door open and that was how all the victims ran out. People saw them and the house owner was lynched after his confession.

“A lot of people were implicated in the kidnapping business of Evans and most of them were silently arrested.

“It was the Igwe’s curse that led to his arrest. The Ikenga told them the day of his kidnap that if they left him, they are in trouble and if they took him with them, they would still be in trouble.

“As they were going with the man, the kidnappers started arguing and fighting among themselves, that was how they dropped him and he went to the Igwe.”

Meanwhile, in the build-up to arrested Evans, the police picked up his pregnant sister and mistress but none of them was able to implicate the kingpin.

According to a source, the sister initially claimed Evans was her boyfriend and she knew nothing about his crime until she was threatened that her baby would be born in the Police cell.

Evans’ mistress, said to be a widow with four children, refused to give him away because he has been her benefactor. The source said the woman, who lived around Okota explained that she would die of guilt if she assisted the police in arresting him.

“The woman said he has been the one taking care of her and her children and that she could not give him away. She said he usually came to her house to take her out and always gave her anything she requested. He was a good man to her and father to her children.

“Police wanted to use her to lure him but she refused to comply. She was arrested. So many people were arrested in the quest to get Evans. It was one of those picked up that told the police he had a scar on his shoulder, which he sustained from a gun injury.

“He has not stopped crying. He drinks only Eva water and has been very quiet. He has confessed that he owns a big hotel in Amuwo Odofin, a house in South Africa, Canada and other properties.

“He also said he used to live at that Igando camp and that he moved to his Magodo mansion from there. He retained the place as detention camp and used Ogechi Amadi’s name on it.

Continue Reading
You may also like...
Related Topics:Cursed, evans, kidnapper