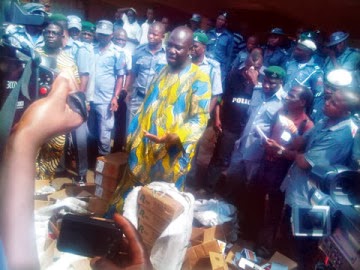 Barely 10 months after an earlier seizure of 56,750 rounds of live cartridges by the Oyo/Osun Area Command of the Nigeria Customs Service (NCS), the command yesterday announced another significant seizure of 30,000 pieces of ammunition packed in 20 cartons.

The latest seizure was made possible through the effort of one of the anti-smuggling teams of the command.

The seizure, coming a few months to the 2015 general election, according to the Area Comptroller of the Command, Richard Oteri, was commendable against the heightened insecurity in the country.

Oteri who spoke at a press briefing said the ammunition was concealed under tubers of yam and yam flour in a rickety white Toyota Hiace bus, with registration number Kwara XC 286 SHA.

The live cartridges which were intercepted early Monday morning along Saki-Ago-Are axis of Oyo State, in Oke-Ogun upper area of the state, might have found its way into the state through the border of the neighbouring Benin Republic, carefully concealed in the bus.
The driver of the bus, Abdulrahman Adegoke, 45, who was arrested on the spot, denied ownership of the live cartridges, saying he was only hired to transport the goods to Ibadan.

The Comptroller lamented that the seizure made by the team led by S.C. Okoli was at the same axis of the state, where last year’s seizure was made. He declared that his command would not relent in its effort to rid the state of criminally-minded people.
According to Oteri, “Our command is poised and passionate about building on the success recorded in the past years and this monumental seizure is commendable to say the least, against the backdrop of the heightened insecurity in the country.

“Nigerians who engage in smuggling of unwholesome goods are to note that we are more determined now than ever to make Oyo/Osun command an uncomfortable place for their nefarious activities, while promising trade facilitation to all legitimate businessmen and women in the area.

“We will continue to partner with other security agencies to make the area and indeed the country at large a safe place to dwell,” he said.

Adegoke, despite his denial of ownership of the live cartridges, and that he was only hired to transport the goods to Ibadan, was later handed over to the Nigeria Police along with the smuggled items.

Receiving the suspect and the items, the State deputy Commissioner of Police, Musa Kawo, who commended the customs for the feat, promsed that the matter would be investigated and the culprits brought to book.

[By Ademola Babalola, THIS DAY Live]