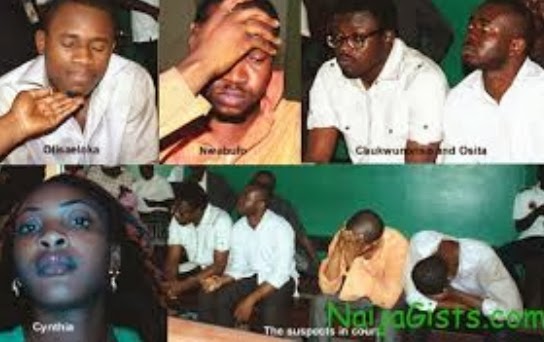 Led in evidence by Lagos State Attorney General and Commissioner for Justice, Ade Ipaye, the witness detailed how the second defendant, Olisaeloka Ezike, went to Agboju Market at the instance of Okumo Nwabufo (first defendant) to procure chain and sellotape, which they allegedly used in terminating the life of their victim.

“It is the defendants’ stock-in-trade to invite women to hotels, drug and rape them”, Edo told Justice Olabisi Akinlade.

Okumo and Ezike, the witness alleged, actually planned to murder Cynthia on her arrival in Lagos.

“He equally sent Nwabufo a text message from his phone asking if, ‘this was the chain and sellotape you asked me to buy?’

“Nwabufo replied Ezike that it will be okay for the job. The messages are all in their phones,” Edo alleged.

The third defendant, Orji Osita (a pharmacist), Edo stated, aided the primary suspects to commit the crime when he allegedly supplied them the Rohypnol used in subduing Cynthia before they ended her life.

The witness also said that the fourth defendant, Nonso Ezike, dishonestly received Cynthia’s Blackberry phone from his elder brother, who is the second defendant.

Meanwhile, Justice Akinlade has admitted the confessional statements of Nwabufo and Ezike and the video evidence made at Festac Police Station on August 20, 2012.

The defendants had earlier, objected to the admissibility of the pieces of evidence, alleging they were obtained under duress.

But ruling on the objection, Justice Akinlade held that the defendants’ claims of being forced through torture to confess to Cynthia’s murder were concocted as there was no evidence placed before the court to back their allegations.

The prosecution, the judge held, proved beyond reasonable doubt that the statements were voluntarily made. A scrutiny of the confessional statements, Justice Akinlade ruled, did not show they were made under duress.

“The defendants were questioned in an open place and were also asked by the Area Commander if they made their statements voluntarily, which they attested in the affirmative.

“Moreover, from the video evidence, the defendants looked well and untortured. It was when the Area Commander realised their narration was the same as contained in their confessional statements that he requested for a cameraman to video them,” Justice Akinlade held.