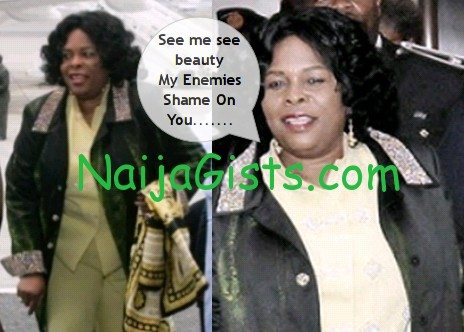 Nigeria’s First Lady, Dame Patience Jonathan, who recently returned to Abuja after spending about two months abroad undergoing treatment for an undisclosed ailment, on Thursday, in Abuja declared that whatever she had gone through was an act of God.

Speaking during a thanksgiving service at the Presidential Villa, Abuja, to thank God for keeping her alive to mark her birthday, she noted that whatever might have happened to her was designed by God for her life.

She thanked God for the gift of life, her immediate family and Nigerians for their prayers for her.

President Goodluck Jonathan was on hand at the event, marked with prayers, thanksgiving and presentation of gifts by family, well-wishers and friends of the First Lady where the president described her as a shining star in his life and also thanked God for granting her good health.

It will be recalled that on arrival in the country last week, she had regretted that there were speculation that she too may not survive life at the Presidential Villa which had recorded some notable deaths in the past.

She had said: “Thank God almighty for bringing me back safely to Nigeria. Wherever there are good people, there are also bad ones.

“There are a few Nigerians that are saying whatever they like, not what God planned because God has a plan for all of us. And God has said it all that when two or three are gathered in His name that He will be with them. And Nigerians gathered and prayed for me and God listened and heard their prayers. So, I thank God for that.

“At the same time, I will use this opportunity to tell those few ones that are saying that anybody that goes to Villa or Aso Rock will die. They mentioned Abacha, they mentioned Stella Obasanjo, they mentioned Yar’Adua and other people. But those people, why didn’t they mention those ones that went there with their families and succeeded and they still came out alive?

“We should remember that Aso Rock is the seat of power and that is where God has ordained for we Nigerians that our leaders should rule from and to rule us right. God is wonderful and is infinite in mercy.”

The First Lady did not spare the media which she observed had written many negative stories about her.

According to her, “At the same time, I read in the media where they said I was in the hospital. God almighty knows I have never been to that hospital, I don’t even know the hospital they mentioned.

“I have to explain what God has done for me. I do not have terminal illness, or rather, any cosmetic surgery talk less of tummy tuck. My husband loves me as I am and I am pleased with how God created me I cannot add.”(Credit:Tribune)