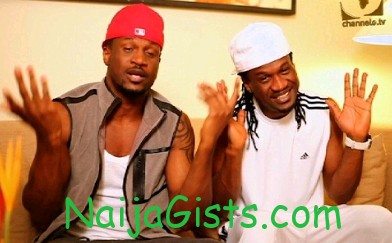 In this recent interview, P-Square music duo who’re ALLEGED members of the Illuminati secret cult renounced the cult. They also cleared the air on the issue of their mum’s murder amongst other. naijagists.com

P-Square – Our  journey into the music  world

It started like a dream but today, we thank God all the glory because it has become a reality. When we started, we had late Michael Jackson as our mentor. That was why in  one of our songs titled, Busy Body which we released about 12 years ago, we tried to copy  Michael Jackson’s dance steps.

Then, our fans used to call us, Paul and Peter. He influenced our musical career. We were challenged by Michael Jackson’s huge achievements in the world of music. We said to ourselves, if Michael Jackson could do all of these, we could equally do better. So, we tried our best and by the grace of God and our fans, we have realise  our dreams.

P-Square On Deal with Konvict music

The only thing we can say, is that we have been signed under Konvict. And to prove this new deal which most people are still doubting, we featured Akon in our ‘’Chop my Money” remix.

You call it private and that’s why, most times we don’t like to discuss it for personal reasons.

My dear, it is not easy. However,  we handle everybody with love and care. One thing is to be a celebrity, and  another is knowing how to handle all that comes with it. Sometimes, they will call on  us just to hear our voices and to wish us well.

What do you do during your leisure time?

Sometimes, we swim or play basketball with our friends.

Why was J. Martins not featured in your latest album, “Invasion”?

We have no problem with J Martins. He was not in the country when we released the album. You know as we are busy so also are others too.  And you don’t expect them to displease themselves in order to please you. But we are in good terms.

Challenges in the industry so far….

A lot of challenges, sometimes after releasing an album our marketers will want to give us condition that we go 50/50. It’s very difficult to compromise with them. Sometimes, if you enter the studio to record you song, they will compel you to do what you wouldn’t want  to do.

The craziest thing you have ever done!

Laughs.. that was when we went for a night party some years ago. Some desperate girls were all over us and before we knew what was happening, they were kissing and romancing us openly. We had to run for our dear lives.

It was when we were coming up. Some of our kinsmen walked up to us and told us that its high time we join them in the village and stop roaming about as if  we are not conversant with the tradition of our people. We felt embarrassed. But unfortunately, we later adhered to their advice.

How do you feel about your mum’ s death?

We feel so bad to know that our mum is no more. But who are we to question the Almighty God. Traditionally, we are supposed to bury her and not the other way round. It is just that it happened so soon.. Indeed, her death was a big blow to us.

It was rumoured that you people knew what happened to her?

Then, it is too bad to hear that people are accusing us of being responsible for our mum’s death. We are not blaming anybody. People are free to say what they want to say. We begin to wonder whether  there is anything that will ever make us to go for the life of our beloved mother.

Her life cannot be quantified in terms of money or fame. So, our answer to this question is that we have no hand in our mum’s death. We only blame the death that snatched her away from us if not so, people won’t be pointing accusing fingers at us. She died after a brief illness.

Aside your mum’s death, there was another rumour that you guys have joined Illuminati?

We are short of words. Why would anybody say such things about us? Well, the fact remains that we do not belong to any secret cult,  whether  Illuminati or anything you call it. We owe our achievements and everything that is happening to us to Almighty God.(vanguardinterview)