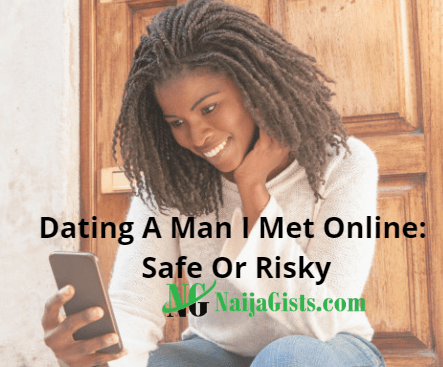 Dating A Younger Nigerian Man I Met Online: Is It Safe Or Risky?

The internet has indeed made the world a global village. From the comfort of your home you can reach out to people of diverse races and  countries in just moments. Social media is yet another big innovation spurred by the internet, giving you the opportunity to talk and relate with people you won’t ordinarily have the opportunity to meet or interact with.

It creates avenues to meet people for whatever kind of relationship you desire be it casual or permanent. Taking advantage of available online dating services or social media as a medium to meet and date has worked for some people and for others, not so much.

Should I Date A Nigerian Man I Met Online?

Now dating a Nigerian man you met online is a risk. It has been proven time and again. Several Nigerian Men are online waiting for the opportunity to take advantage of unsuspecting ladies, especially foreign ones. And the insincere ones are way more than those who are sincere.

And if you are willing to still risk it then be sure you aren’t the only one make all the investments and putting all of the sacrifice into the relationship financially or otherwise. You should also demand a face to face meeting as time progresses.

Of course safely meeting him in person is going to be a quite difficult to pull off if you both are in different countries. If this ends up being the case, then why bother dating? What is the point in having an absentee boyfriend whom you are not even sure is real. But if you guys can pull off a face to face meeting and you think it can work, you could give it a try.

Dating a Nigerian man you meet online, there are high chances that he sees you as his money bag and he will eat from that bag for as long as he can. So do be careful and just avoid these Nigerian men you meet online totally.

Dating A Nigerian Man Online? Is It Risky?

Your answer in plain and simple terms is a big YES. Dating a Nigerian man online is risky. Dating any man you meet online is generally a risk. A lot of people discourage this medium of meeting since you cannot really know or judge a person’s character through their text alone.

This risk practically doubles when you are found to be dating a Nigerian man online. It is okay to meet someone online, nothing wrong with that but meeting them in person also should be part of the deal, should you wish to date each other.

Venturing into a relationship with a person you haven’t physically met or interacted with seems more like a waste of your time as well as an unnecessary risk. Such a relationship is not one to be view with seriousness

You can find out quite a lot about a person by physically being in their company for a while. Many have trusted the wrong men they met online and have come to harm so during a meeting arrangement, a very public location should be your meeting point. Be very cautious dating any man online, Nigerian or not is a risk. So if you don’t have foolproof steps to protect you from online dating hazards, then avoid it all together.

Online chemistry and physical chemistry are worlds apart. You may find that you both connect perfectly in the virtual world, but hardly connect in the real world. They may not be who your mind has carved them out to be. These are just few case scenarios that could occur.

Therefore having a virtual boyfriend is only acceptable if you probably want to play around. But if you are looking for something serious and worth your time, online dating isn’t something you should dedicate your life to.

I’m Dating An Edo Man: What Should I Know

The Edo people are quite a popular tribe rich in culture and history they are found in the south mid-western part of Nigeria and bear a couple of similarities to the Yoruba tribe, they both share a lot of history together because they are believed to have descended from a common ancestor.

Dating an Edo man, you should be the kind of girl considered in Nigerian terms to be a sharp babe. Edo men are really into appearances. You should be someone whose look is on point because the good appearance of an Edo guy’s woman is considered a status symbol and a show of his capability.

So expect a lot of show off to his friends. A lot of Edo men also tend to be quite outspoken and quite bold, saying exactly what is on their mind without much sugar coats. That is something you should prepare for. If you mess up be very sure you will be called out. This characteristic applies to his family as well so learn not to take their blunt speech too much to heart.

I’m Dating An Igbo Man: What Should I Know

The Igbo are the second largest tribe in Nigeria. They are a well-traveled people, who have the talent for uncovering profitable business opportunities wherever they find themselves. There are a group of people who have the ability to thrive on their own.

Being with a man from this tribe, you should know that he will act and speak in ways which appear to be insensitive and won’t issue an apology because he doesn’t feel he has done something wrong. With these men you may have to be more understanding and overlook a lot of such statements and actions.

You have to communicate very clearly because what comes across to you as insensitive is just him saying what he sees, how he sees it. It is mostly not meant to upset or insult you. So expressly let him know when you want him to tone it down.

An Igbo man is willing to spend on you. These men take pride in stuff like that and can be very generous. They are said to make good boyfriends and husbands in this wise.

Igbo people are a very industrious lot and they expect same from the woman in their life. You being idle could make him term you as lazy and of no use to him on a long term basis. So when dating an Igbo guy, be ready to do business.

They are a hardworking lot. Igbo men tend to be stable enough financially. He is willing to spend his money to make sure the woman in his life is well provided for. This is usually a priority amongst men of this tribe.

They are generous and not tight fisted with money when it comes to issues of their women. But be ready as he may not have the kind of class and poise you imagined. They also mostly expect a dutiful and obedient wife.

I’m Dating An Hausa Man: What Should I Know

The Hausa people of northern Nigeria are a very traditional and religious kind of people. Their ethics guides and dictates everything about their lifestyle including dating.

Dating a Hausa man means you will most likely be required to join his religion. As Hausa men are predominantly of the Muslim religion becoming part of his religion is a step you may have to take if the relationship is going to become a permanent one.

The dictates of their tradition and religion, you have to learn to strictly adhere to. For someone not used to things like this, it may come across to you as restrictions. If your courtship eventually progresses into marriage, be ready to give up a lot of what you consider to be a normal lifestyle

If you are indeed dating a Hausa man be prepared to do dating the old conventional way which requires you mostly relating with each other in the clear eye of the public. Being constantly chaperoned is something you may want to prepare for.

If you are of a different religion, you may receive some hostility and general resistance from friends and family of the guy in question. Being fully accepted is really not sure in the least.

There is finally the risk of not being his only wife, that is if your relationship makes it to this stage. You may also be subjected to the dictates of women should be seen and not heard.

Obedience, submission and decency should become your new watch words.