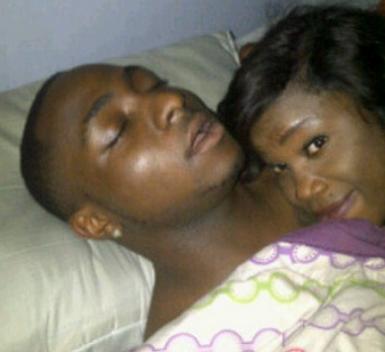 Few months ago, Nigerian hip hop artist David Adeleke aka Davido was caught on camera while sleeping on the bed with an unidentified lady.

The picture became so viral that almost all his fans saw it.

Apparently the lady in the above picture has apologized to Davido and his family members for invading the singer’s privacy.

In this latest interview with Ebuka Obi Uchendu, hear what Davido said on this story below;

I was asleep in bed. The girl just snuck in and (makes gesture of taking photograph) I don’t know her. I used to stay in an apartment back then and movement was kind of free. Maybe I didn’t lock the door and she just snuck in and took the pix. I have however moved to my new home where there is much tighter security.

I didn’t realise what was going on even after the pix was posted online. I traveled to Ghana immediately afterwards and I noticed on the plane people were just staring at me and I wondered why. Since it was a flight my phone was switched off and so I had no idea what was happening online.

When I got to Ghana, I still got the same stare from people. I was asked by friends to switch on my phone and that was it. 300 calls from Dad, 600 calls from grandma, everyone asking Davido what’s going on.

The girl later apologised to my people but then the damage had already been done.

Which kind lady is this? Abi she wan become popular by force.