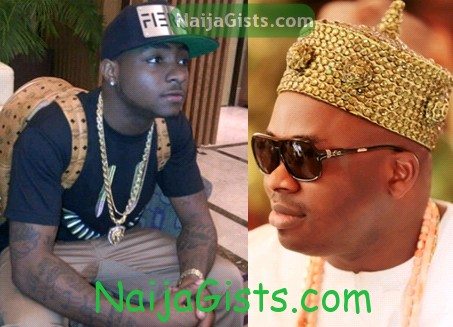 Based on information received from eye witnesses, Nigerian hip hop singer David Adeleke alias Davido who was recently assaulted with a dirty slap by a Nigerian mobile police officer has been slapped again and this time around, it was a popular Lagos monarch, King Saheed Elegushi that slapped him. naijagists.com

Immediately after Dynamix awards party that took place at Voodoo Lounge at the popular Elegushi beach in Lagos, we learnt heavily drunk Davido’s cousin, B-Red was involved in an intense argument with the aforementioned monarch.

Davido who tried to interrupt the argument allegedly touched the monarch in a disrespectful manner. Davido’s move forced the monarch to give him a dirty slap on the face.
King Saheed Elegushi‘s bodyguards later descended on Davido and his bouncers, they were given the beating of their lives.

Few minutes later Davido and B-Red promptly apologized to the monarch after a crew member warned them.

Apparently, Davido & B-Red didn’t know the guy is a monarch.

Few weeks ago, BBA star Karen Igho was slapped by a security guard and now it’s Davido’s second time of getting a hot slap within the year.

This boy needs to cool down o.