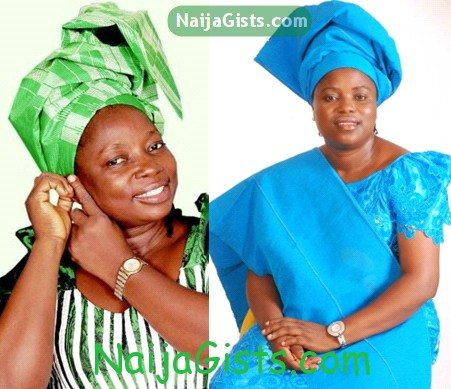 Recall that weeks back we served you hot, fresh and sizzling, the intriguing love triangle story of a top Lagos pastor, Taiwo Idris, the Founder and Senior Pastor of Christ Revival Rain Mission. But just as the dust of that story is yet to settle down, another sly and refreshing angle has just been brought into the whole scenario of our dear lustful pastor, whose appetite for sex with other women apart from his legal wife is unquenchable.

In the course of our digging more facts about this philandering pastor, we scooped that Pastor Idris has allegedly confirmed to be in a serial romantic relationship with two top female gospel artistes, Dunni Olanrewaju a.k.a. Opelope Anointing and Bisi Alawiye Aluko. Insiders alleged that the two gospel musicians have been regular visitors to the ‘man of God’ for reasons that cannot be easily deciphered but far from spiritual, according to our source who swore that Pastor Idris has other things to do with these women other than counseling.

Apart from these allegedly unwholesome immoral dealings of Pastor Idris with these ladies, who are both married, we also gathered that in the recent past, Idris has been undergoing investigation by the police for yet to be disclosed reasons. All these have further gone to lend more credence to our earlier story, which the allegedly Casanova pastor has refused to either confirm or deny, as all our efforts to contact him on phone proved abortive.

As a reminder, we inundate you with the first story we regaled you with weeks back. It is still as refreshing as ever just, as this new twist in the unfolding scenario of Pastor Taiwo Idris and his miscellaneous amorous affairs with multiple women.

Celebrated founder of Christ Revival Rain Mission, Prophet Taiwo Idris is caught in a steamy love triangle- while he remains married to his wife, Lady Evangelist Folashade Idris, the music loving clergy is alleged to be romancing an Oregun, Lagos based business woman.

The torrid affair between the duo, which has become the main talking point at the Mowe based church, is equally having its adverse effect in the home-front of Ijebu (Ogun state) born pastor. The red-hot romance between the light-complexioned Owo (Ondo) born bizman and Prophet Taiwo Idris which started few months back has become so deep that Lady Evangelist Folashade Idris is no longer feeling safe in the union. On many occasions, she has had the course to report her husband to some of his friends and superiors, on the failing state of their marriage.

However, Prophet Idris, who was born a Muslim (Kamoru Idris) before he found Jesus Christ and became a worker in His vineyard, is said to be absolutely head over heels for the bizwoman. Although, the convener of the now popular ‘Praise Night’, which has featured throngs of prominent gospel music crooners, including the Juju music icon, Evan. Dr. Ebenezer Obey, is said to be happy in love that he’s even glowing, but a family source claimed that the pastor may have been charmed.

‘He’s not himself’ the source insisted. Mama Doyin, as the bizwoman is fondly called, we gathered, has gain tremendously from the relationship, and a source disclosed that its obvious that the new romance is doing her a world of good. Insiders argued that the prophet has vehemently denied the love affair before many respectable men of God in Lagos and Ibadan.

But, what surprised many family members who are in the know of the love-mess, was that Prophet Idris, who is equally romantically linked with two gospel music divas, coughed out a whooping sum of #40million to acquire the entire block of four flats where his alleged mistress resides in Oregun, Lagos.

CELEBGLITZ learnt that all the efforts made by Lady Evangelist Idris to get the woman evicted from the house proved abortive.

[Culled From News Of The People Magazine]