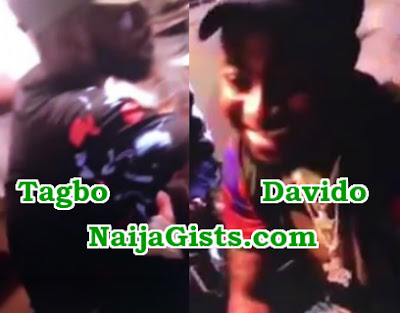 Oct 4, 2017 – Davido Tagged A Blackaxe Cultist As Last Video Of Him Partying With Friend He Allegedly Murdered Leaks

Controversial singer David Adeleke is still under fire after his close pal, Tagbo died on the night he marked his birthday with the singer and others.

A video footage of Davido chatting with the deceased has surfaced. See it below

The sister of the deceased, Nollywood actress Caroline Danjuma said the murder case has been transferred to the Police station even as family members of the deceased were  yet to be notified of his death.

Since Caroline Danjuma accused Davido of killing her brother, the report on the streets is that the singer is a member of the dreaded blackaxe cult who gets away easily with cases of this nature.

An insider told NaijaGists.com that Davido and some axemen were seen leaving the party that night for Oniru Beach when the deceased decided to follow them in his own car.

Davido and his gang members were said to have dumped his corpse in a nearby hospital before they fled.

Meanwhile, Davido has been telling everyone who cares to know that he was not involved in the murder case.

Continue Reading
You may also like...
Related Topics:davido, friend, poisoned