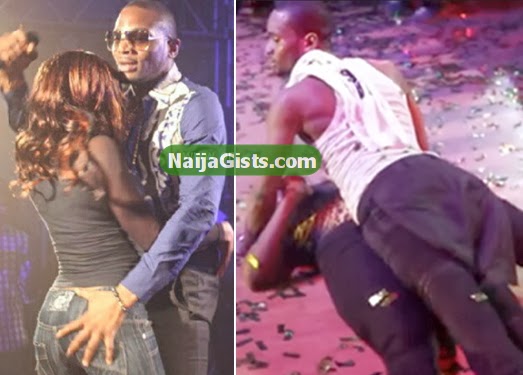 D’banj was one of the artists invited to perform at a concert tagged “Battle of Africa” in Zimbabwe recently.

We learnt kokomaster got into trouble after he ran out of music to sing at the concert.

Sources claim the talented musician opened the ground with his hit song Fall in love followed by Oliver Twist, Kukere remix, Don’t Tell Me Nonsense, Igwe and Why Me.

After exhausting all his songs, he introduced his kokoletes female dancers to the stage and ordered them to shake their bum bum.

“He ran out of steam after exhausting his familiar songs in less than an hour and went into what many revelers described as hogwash,” said a witness.

“Let me see all my Kokoletes on stage, now shake your boom boom and do the catwalk,” D’banj was quoted to have said before plunging into the act that sent him packing.

The angry audience booed D’banj offstage, shouting at the top of their voices.

This is not the first time D’banj will introduce indecency on stage. At the recently concluded Felabration festival, sources claim he did the same thing with a girl on stage.

With this show of shame, it seems D’banj is desperately seeking relevance through indecency.