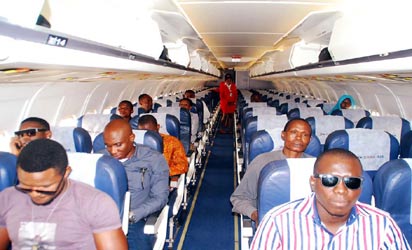 A suspected Nigerian stowaway was yes­terday found dead on the wheel well, the un­dercarriage compartment of an Arik Air aircraft at the Murtala Muhammed Inter­national Airport in Lagos.

Arik Air engineers were checking the aircraft in preparation for a flight when the body of the stowaway (a man) was discovered in the main wheel well of the air­craft. The discovery was im­mediately reported to secu­rity and regulatory officials at the airport.

It could not be immediate­ly established how the dead man entered the aircraft un­noticed.

Adebanji Ola, spokesper­son for Arik Air in a state­ment said even the airline couldn’t tell from which location or airport the man entered the aircraft. “Inves­tigations has commenced to determine where the stow­away actually originated,” Ola said.

“The aircraft has been fu­migated by the Port Health authorities while the Nige­rian Civil Aviation Authori­ties officials are carrying out their investigations,” he add­ed. It would be the third time in the last three years that Nigerians would stowaway on flights operated by Arik Air, the most remarkable be­ing that of a young boy who successfully stowed away on a Benin –Lagos flight in 2013.

Sunday Sun learnt that men of the Lagos Airport Police Command have evacuated the remains of suspected stowaway dis­covered in the undercarriage compartment of the Arik Air aircraft (Airbus A345 -500, Reg CS-TFX) and deposited it at an undisclosed mortu­ary, following due diligence by the relevant Aviation and Security agencies. The Airbus A345 -500 is used by Arik Air to operate the Lagos – Dubai, and Lagos – South African routes.

Yakubu Dati, spokesper­son for The Federal Air­ports Authority of Nigeria (FAAN) told journalists that the agency is currently reviewing footages of the CCTV system and airside security operations with a view to identifying the gaps and personnel failure, if any, in order to take remedial ac­tions following the latest stowaway incidence.