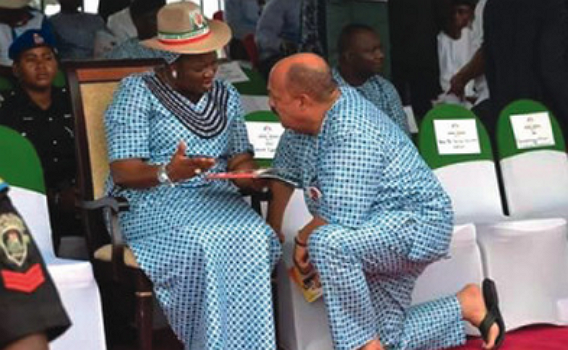 Prostrating for the wife of Akwa Ibom State governor, Mrs. Unoma Akpabio, is a common feature in Akwa Ibom state.

Those who do not oblige to this concept are often considered to be anti-Akpabio’s administration.

A member in the Akwa Ibom State House of Assembly representing Mbo State Constituency, Mrs. Alice Ekpenyong, knelt before the governor’s wife at the Independent National Electoral Commission office, when they were being presented with the certificates of return in 2011.

Similarly, many of the commissioners in the state cannot stand before Mrs. Akpabio to talk; they must either face a different direction or stoop low before her.

Recently, the Commissioner of Works, Mr. Don Etim, was found kneeling to talk to her during one of the Peoples Democratic Party campaign rallies in the state.

Also a commissioner for Women Affairs and Social Welfare, Dr. (Mrs.) Glory Edet, was recently seen fanning her during the presentation of the 2015 Appropriation Bill to the House of Assembly.

A strong PDP member, Mr. Silvernus Okon, stated that the governor’s wife has no regards for anybody.

He added that even if Etim had wanted to kneel before her, she would have cautioned the man against doing so.

“It is unbelievable that Don Etim who is old enough to be her father could descend so low to kneel before her.

“This tells you the type of people that we have in the state. Even if Etim had wanted to kneel for her, we expected her to have stopped him and cautioned him against doing so in future,” he said.

All attempts to get Etim to react to why he knelt before the governor’s wife failed as calls to his phone indicated that it had been switched off.

A text message was also sent to him which he did not reply.

Continue Reading
You may also like...
Related Topics:akpabio, rude, wife

2 Women Fainted At Patience Jonathan, PDP Rally In Benin, 2 Arrested For Pulling Down GEJ Banners
Itsekiri Leader: Why We Left Jonathan For Buhari