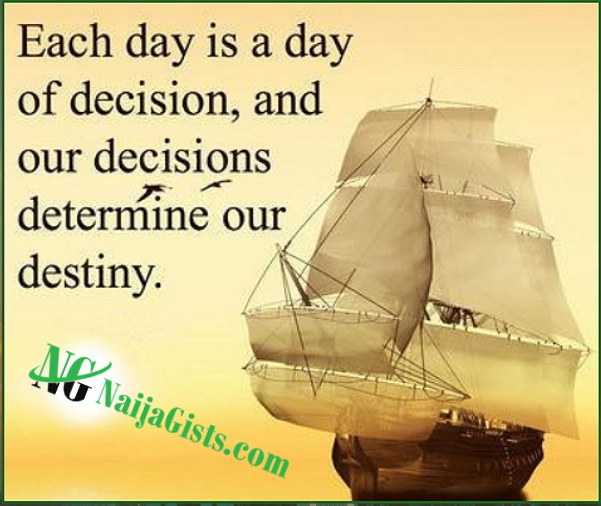 Decisions Determine Destiny! How You Are Born Is Destiny, But How You Die Is Decision!

‘’it is choice and not chance that determines your destiny.’’ –Jean Nidetch

In his legendary book JULIUS CEASAR, William Shakespeare said, ‘’Men are often the masters of their fate, the fault O dear Brutus is not in our stars but in ourselves that we are underlings.’’

The philosophy of destiny that so many people deceptively believed and has made so many people to be complacent is that no matter what we do or don’t do, there is a future waiting for us! This is a fallacy that the earth has endured, and it has destroyed the future of many. I have noticed that even those who assert that everything is predestined and that we can change nothing about it still look both ways before they cross the road! The future is not what we wait for; rather, the future is what we create now.

Long time ago, there was an old man who lived in a tiny village and was well known for his wisdom. It seemed that he could answer any question that was posed at him. And there was a boy who had questioned the wise man for few times just to trick and prove the old man can be wrong. However, he hadn’t been successful until one day he found another idea: He would hold a little bird in his hand and hide it behind his back; he would then ask the wise man whether the bird in his hand was dead or alive.

There is a common saying that when life gives you lemons, make lemonade out of it. One of the most inspirational and awesome stories of fate, destiny and destination is that of the living legend, Stevie Wonder. Life was in no way fair to Steve but he eventually made a wonder out of it.

Stevland Hardaway Morris was born on May 13, 1950. An American musician, song writer, record producer and multi-instrumentalist became one of the most creative and loved musician performers of the late 20th century. Due to being born premature, he had retinopathy which made him blind shortly after birth.

Stevland started playing various musical instruments at an early age. When he was 11, he sang his own composition, “Lonely Boy”; people were astounded by his ability to play numerous instruments and sing simultaneously which made people refer to him as “A little wonder” and later called Stevie Wonder. Despite his disability, he released his first album at the age of 12, and released several albums of songs thereafter.

On August 6, 1973, Stevie Wonder was involved in a serious automobile accident while on tour in North Carolina. The accident left 23year old Steve in a coma for four days and resulted in a partial loss of his sense of smell and temporary loss of his sense of taste in addition to his blindness. Despite the setback, at the age of 25, Stevie had won two consecutive Grammy Awards and never stopped composing and releasing his albums.

Stevie Wonder, being a prominent figure in music, has till date recorded more than thirty top ten hits and won a total of twenty-two Grammy Awards which is the highest number ever won by a solo artist.

He won a lifetime achievement award, an academic award and was inducted into the rock and roll hall of fame in 1989. He made a difference in the music world, starting his career at the age of 11, and despite his blindness, played the piano, organ, clarinet, melodica, synthesizer, harmonica, bongos congas, drums and bass guitar.

Fate made him blind but he alone turned it to an amazing thing –The gift of blindness!

Abraham Lincoln said, ‘’The best way to predict the future is to design it’’. In life, if you don’t know where you’re going, any road will take you there. Decisions determine destiny! You can’t change the direction of the wind, but you can adjust your sails to always reach your destination. Jack Welch, the former Chairman and CEO of General Electric (GE) once said, ‘’control your own destiny or someone else will.’’

Don’t ‘delegate’ your life to circumstances and situations; while seeking the face of God for direction, you must also take full ownership of your life. It is great abandonment and dereliction of purpose when you are waiting for God to do what he has fully equipped you to do for yourself. You have the right to choose and not to accept any ill-fated destiny. 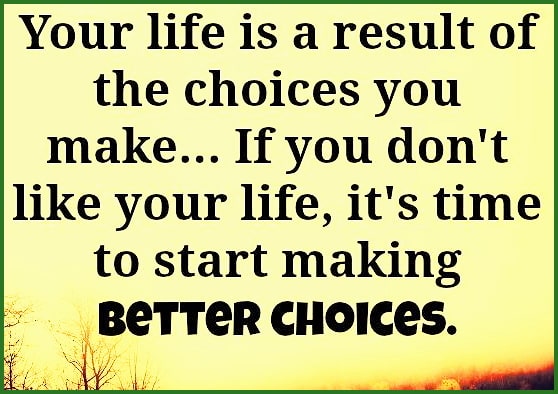 QUOTE OF THE WEEK: It is just a stupid excuse to wait for things to happen instead of making them happen.’’ –Cecily Von Ziegesar

To Live A Fulfilling Life, Avoid Manipulative & Abusive People – See How To Recognize Them
The Greatest Hindrance To Success Is The Previous Success