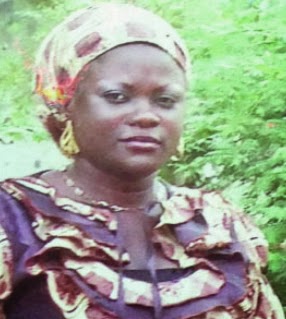 When Tawakalitu Rabiu was tying the nuptial knots in the traditional way with her love, Aro Razak some three and half years ago, parents, families, friends and relatives wined and dined, as the love birds’ faces shone with rapturous joy. Little did they know that all that would end in tears, suspicion and bitterness, leaving behind an acrimony that would last a long time. Tawakalitu died last November after a prolonged illness and under strange circumstances. Her death has strained the relationship between her family and her husband’s in whose custody she died after her mother was denied access to see her for a month.

Mrs. Oluranti Adesina, Tawakalitu’s mother told Saturday Sun that Razak, his father and the leader of a white garment church where her daughter died, know something about the young woman’s strange death.
Grief-stricken and bitter over her daughter’s sudden death, she said: “ Razak came to take her away from me, saying that he didn’t want me to come and see her, except her elder brother and one of my sons-in-law. He said he took her to a white garment church where my daughter was being attended to by his father and leader of that church. The strange thing is that my daughter was there for a month and he insisted I must not come to see her. My daughter couldn’t even see her child. I bought her a cell phone with which she could call me but I gathered that her husband took the phone from her, and removed the sim card in it.
“He assured me that he would ensure that she gets better, saying we should allow him to take care of her as she is his responsibility. But I suspected that whenever my son-in-law and my first son went to see my daughter, they only come to tell me what Razak and his people tell them about my daughter, not really what they find out about her.

“Each time I asked Razak about my daughter, he would say I shouldn’t be worried, that once she is well, she would come and see me. I want to believe my daughter suffered in great pains before she died in that church, this is because my son once came to tell me that he caught the church leader once while he was using cane to flog her. He said that the church leader held a cane while my daughter was protesting that she be allowed to rise up and rest her back on the wall. She was on a drip then. My son said he had to stubbornly carry her up to rest her back as she demanded. I wonder what the cane the church leader held was meant for? Is that treatment or ill-treatment?

“My daughter eventually died in that church. It was when she died that I eventually found out that the church they took her was right here in Lagos. Meanwhile, Razak was telling lies to me that he has been taking her to different churches outside Lagos. I later found out that the church in which my daughter died is owned by Razak’s father and his friend, who is in charge of the church.”
The agonizing mother of Tawakaliyu recalled the relationship between her family and her son-in-law before the sickness of her daughter and her eventual death.
According to her “My daughter married Razak some three years ago. The young man put up a good character then, I didn’t know he was pretending. My husband was still alive then. Why I’m suspecting that Razak would know something about my daughter’s death is that it was after she married Razak that she began to fall sick almost every week. She wasn’t a sickle cell patient and I’m sure that if she has been getting sick so often during their courtship, Razak wouldn’t marry her.
During their marriage, Razak was always reporting my daughter to people whenever they quarreled.

“Another strange thing I noticed that arose my suspicion is that my daughter used to fall sick whenever it was close to her menstrual period. It is also strange that Razak’s father seems to exert undue influence on him against my daughter. When they had their baby, Razak was having a misunderstanding with his father and it was so serious that the old man didn’t attend the christening ceremony of the baby and things went on smoothly between the couple but when the crisis between Razak and his father was settled, he stopped being well behaved to my daughter and me. He was always doing his father’s bidding concerning my daughter.
“My daughter used to complain of feeling weak from inside of her and I spent so much taking her to several doctors, even native doctors who asked us to make several sacrifices but nothing happened. But when we got a place where we were assured of her getting well if we could spend N50,000 and we told Razak, he offered to come and take her away. That was late October. He called to tell me that she had passed on late November.”
She disclosed that when she discovered that her daughter was being flogged with cane in the church under the guise of delivering her from craft, she made attempts to save her life by taking her away from them but was resisted.

“When my son caught the pastor of the church using cane to threaten my daughter, he came to tell me that he wanted to take her away from the church and I accepted. He went with some other young men but they didn’t allow them to take her. Instead, my son said the pastor told him to leave Tawa and go and take care of himself. The pastor told my son that ‘your father who has been protecting you is dead. Leave Tawa alone and go and take care of yourself and others.’ I know that this could mean that they want to harm the remaining children, so I want the Nigerian people to compel Razak’s father and his pastor to write an undertaking that they won’t harm my other children. They know our names and have our pictures in their hands, they should please do no harm to me and the other children”, she added.

She said the body of Tawa after death showed signs of serious beating. Her words: “I couldn’t see Tawakalitu’s corpse but those who saw her came to confide in me that she looked horrible in death. They said the unpleasant sight of my daughter’s corpse told them that something fetish could have killed her.”
Ademidun Adesina, Tawakalitu’s younger sister had tears in her eyes when she told Saturday Sun what her family encountered when they wanted to bury her sister. “Razak didn’t want us to bury my elder sister in the house he built. Before we took her body there for burial, he had instructed the land speculators not to allow us but when we told the land speculators the circumstances leading to my sister’s death, they turned against him and allowed us to lay her remains to earth there. They just packed into the house when my sister died, in fact, it wasn’t up to two weeks they packed into the new house. Now, the house has been locked up, not even Razak could live there”, she stated.
Razak’s story is slightly different when he spoke to the reporter on phone. Saying he couldn’t have killed a woman he loved to get money, he challenged his in-laws to use anything to punish the killer of Tawakalitu. “A woman I loved so much and did the major things that needed be done to marry her, is it possible for me to kill her? No!. That is why I told my wife’s people that they should do whatever they could do to deal with whoever is behind the death of my Tawa”, he said.

Giving his own account of what led to his wife’s death, Razak explained that “the sickness started when my wife had the first pregnancy and continued. I remember that a man of God once instructed us that my wife should desist from going to her family’s place too often. But she didn’t heed that advice. But eventually, she gave birth to the baby but after that her sickness became too often. We were taking her to her family and other places for treatment. Later she had a second pregnancy and once her legs were stolen and we took her to her father’s place for treatment but that didn’t really help. At the hospital we were once told that it was high blood pressure but they couldn’t cure it as they referred us to another one.

“There was a time we took her to a church where they assured us that she would be well if we bought a goat and slaughter it for the treatment. My family had to tax us to get the money but while we were on our way to get the goat, the people called us on phone to come back, they said that they couldn’t do the sacrifice again since her mother was around. The pastor didn’t tell us the reason for calling off the treatment but gave an impression that it was because of my mother-in-law.

“After that encounter, we tried several other places where we spent money but nothing happened. Then we resolved to take her to my dad’s church and insisted that her mum shouldn’t see her. There was a time her elder brother wanted to take her away from there but she said she didn’t want to leave as she was getting better.”
In what appeared as a game of passing blames, the widower fingered his mother-in-law as the one behind the daughter’s problems. “On a certain Sunday morning, a man came to me as I was going to work he said that what was responsible for my wife’s sickness is diabolical and sounded a note of warning that she would not make it. I was afraid and I called my dad but he calmed me down, saying no evil would befall Tawa.

“Then as usual, my mother-in-law began to call me. She was always monitoring my movements. Sometimes, she would say I was telling lies about my movements. When my wife was going to die, she thanked all us with her, saying she was very grateful for our efforts to make her live but that some wicked people were too stubborn to let her live”, he added.