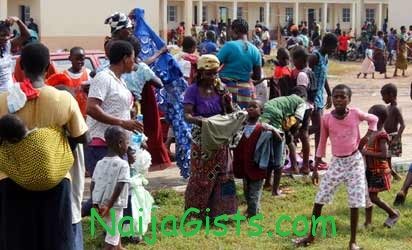 According to Mr Francis Agarivie, a Red Cross official, 2 births were recorded at Saint Patrick’s college camp and the 3rd one at the Institute of Continuing Education camp.

Agarivie said the 2 babies delivered at Saint Patrick were male and the delivery took place on Oct 2nd and 6th while the 3rd baby, a female was delivered on the 11th of Oct.

The babies and their mothers, had been moved out of the camps “in the interest of the babies’’.

Governor Emmanuel Uduaghan, had at a meeting with political office holders in Asaba on October 10, directed that all pregnant women in all the camps in the state be moved to the General Hospitals during labour.

According to the governor, the measure is to take care of any unthinkable emergency during the delivery process.

He directed the Commissioner for Health, Dr Joseph Otumara, to deploy enough medical personnel, especially doctors and nurses, to the camps.

Meanwhile, ice cream vendors and other hawkers have been barred from the camps in Asaba.

Agarivie, said the measure was to check the recurring cases of diarrhoea among children.

He said that most of the cases had been traced to the children’s contact with “unfamiliar food items”, especially ice cream.

A medical officer in the clinic at St. Patrick’s College camp, Dr Francis Odion, confirmed that diarrhea cases were rampant among the children, who visit the clinic for treatment.

Odion said that from September 25 when the clinic became operational, to October 11, no fewer than 720 patients had been treated at the centre.

He said that the sickness common among children in the camp were diarrhea and vomiting and malaria, while most of the adults had cases of hypertension, depression, arthritis and diabetes.

“We have referred no fewer than six cases involving typhoid and diabetes, to the General Hospital at Okwe, so far,’’ he stated.

At the Immunisation Desk in the clinic, the matron in charge, Mrs Philomena Dikedi, said no fewer than 180 children between zero and five years old, had been immunised against the six deadly diseases.They are Tuberculosis, Whooping Cough, Measles, Tetanus, Polio, Hepatitis B and Yellow Fever.

Medical records at the Continuing Education camp , showed that no fewer than 1,100 patients had been treated as at October 11.