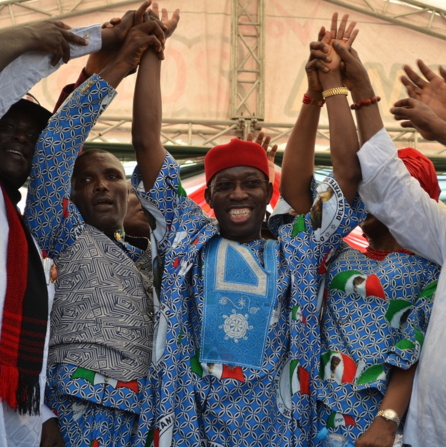 The Chief Judge of Delta State, Justice Marshal Umukoro, has compromised at least two of the three members of the tribunal handling governorship, House of Assembly and National Assembly elections petitions in the state, a judicial source and a security agent have disclosed to SaharaReporters.

According to one of the sources, Justice Umukoro had invited all the tribunal judges handling election petitions in Delta State to be his weekend guests in Port Harcourt, capital of Rivers State. Two of the three judges accepted the invitation, with the chairman, Justice Nasiru Gunmi, holding out. Justice Umukoro then allegedly shared N3 billion provided by Governor Ifeanyi Okowa between the judges. It was unclear if the chairman of the tribunal accepted any share of the bribe.

Our source, a senior official in the Delta State judiciary, claimed that the compromised tribunal members agreed to deliver favorable judgments validating all elections in which candidates of the Peoples Democratic Party (PDP) were declared winners. In addition, the tribunal consented to uphold electoral victories of some PDP-leaning candidates who ran on the tickets of other parties.

Governor Okowa and other PDP candidates who were declared winners of state and national legislative elections are facing challenges at the tribunal.

According to our source, Mr. Okowa and some PDP officials, including Speaker of the state legislature, Monday Igbuya, had appealed to Justice Umukoro to make contact with and influence the tribunal judges to ensure that their rulings favor PDP elected officials.

“It was after the deal was sealed and delivered that judgment was delivered in favor of the speaker, even though the evidence of election malpractice and rigging was so obvious,” said the source.

According to the source, members of the tribunal had been furious about a report that some state legislators were contributing money with which to compromise them. “But this time around, the bribe was rearranged through Justice Marshal Umukoro. Some of the house members have received their victory.”

The source said Governor Okowa raised the N3 billion from the N5 billion approved and released by the governor to Uche Okpuno, the chairman of ULO, the construction company handling the upgrade of the Asaba International Airport.

Our judiciary source asserted that the tribunal was now set to deliver judgments upholding all the elections of PDP officials, adding, “even those with bad cases will at the end of the day smile home.”

According to him, the deal would also favor those politicians who defected from the PDP to contest elections on the ticket of another party. “The whole point is that these defectors are still known to be PDP. And by upholding their elections, the tribunal hopes not to raise eyebrows,” he said.

A well-placed security source in the state confirmed that the tribunal members had been compromised. He cited the case of the state assembly speaker, Mr. Igbuya. “His [the speaker’s] case was so bad that even his lawyer was praying the court not to cancel the results totally, but to order a rerun in some areas. But all of a sudden, a favorable judgment was given to the same Igbuya,” he said.

In a related development, with barely two weeks before the tribunal delivers its verdict on the governorship petition, a political pressure group in the state, Hope Delta Democratic Movement (HDDM), has accused the PDP and Governor Okowa of compromising the tribunal members.

In a statement obtained by SaharaReporters and co-signed by the chairman and secretary of the group, Francis Umukoro and Mr. Emeka Anyasi respectively, the group alleged that Mr. Okowa, the PDP chairman, and the Speaker of the Delta State House of Assembly had been engaged in last-minute desperate efforts to compromise the tribunal.

“Some of the tribunal judges earlier resisted the overture made to them, but after much pressure, a deal [has] been allegedly struck, to ensure that, on a wholesale basis, all the APC and Labor Party cases pending before the tribunals suffer defeat,” the group stated.

The statement continued: “Information reaching us reveals that in spite of initial resistance by the eminent judges, a deal has now been struck. This deal we understand is to affect all APC and Labor Party candidates whose cases are still pending in the Tribunals. As a credible activist organization fighting for the enthronement of democracy, justice and accountability we would not ordinarily comment on a matter that is sub-judice, but we are constrained to speak out early because the lives of Deltans are involved and we would not condone corruption in whatever form.

“This allegation has become so strong and the details coming out so specific that it has become hard to ignore. Also, the recent judgments by the State Assembly election panel, particularly in the case of Chief Anirah, the APC candidate, vs. Rt. Hon Monday Igbuya, where Chief Anirah’s petition was off-handedly dismissed and Hon. Igbuya’s election surreptitiously upheld against the facts and run of the tribunal submissions, gives so much credence to the allegation.

“In fact, a study of the certified true copy of the judgment showed that a clear judgment against Rt. Hon. Monday Igbuya was somersaulted in the very last page of the ruling to a favorable verdict leaving the submissions before and in the later pages inconsistent and irreconcilable.”