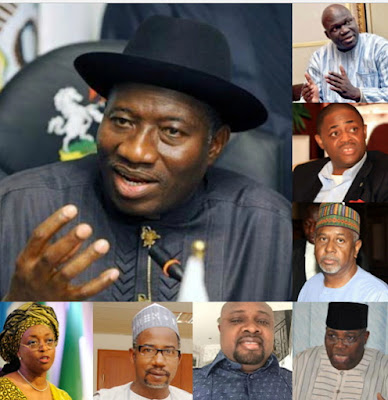 A group under the umbrella of National Association of Democratic Lawyers (NADL), has described, as inaccurate and dishonest, former President Goodluck Jonathan’s recent claim that his administration did not try to silence Nigerians by harassment and detention.

The NADL made this known in a statement signed by its president, Mr. Lucky Aghanenu. The NADL explained that the former President is guilty of willful loss of memory and needs to be reminded that its members defended some of the victims in court, including journalists whom his administration made efforts to silence.

“For example, the editors of The Nation and Leadership were arrested for forging the signatures of former President Olusegun Obasanjo and President Goodluck Jonathan respectively. The charge of forgery filed against the Leadership editors was being prosecuted under President Jonathan through an external firm of lawyers. The case was recently withdrawn by the Attorney-General of the Federation and dismissed by the Federal Capital Territory High Court,” said the NADL.

The group also recalled that in 2014, distribution vehicles of newspaper houses were intercepted by the Army, which seized thousands of newspaper copies under the pretext that they were publishing stories considered uncomplimentary to the anti-terror war being prosecuted by the Jonathan administration. The NADL noted that the media houses were then paid monetary compensation with funds found to have been illegally diverted from the Office of the National Security Adviser under Colonel Sambo Dasuki (retd.).

Abridgment of human rights under the Jonathan administration, added the NADL, was not restricted to journalists and media houses. The group pointed out that children in the Northeastern part of the country had their rights trampled upon just like members of the Bring Back Our Girls (BBOG) movement, who were attacked by government-sponsored thugs when they publicly demanded that the Jonathan administration should expedite action in securing the release of the kidnapped Chibok girls. When the BBOG members resisted the thugs, noted the NADL, the Jonathan government banned public meetings and rallies in the Federal Capital Territory, something that was successfully challenged by the BBOG at the Federal Capital Territory High Court.

The lawyers’ association also noted that the Nigerian Governors’ Forum (NGF) was deliberately broken up under the Jonathan government which, it said, infamously promoted the view that 16 votes were greater than 19 at the forum’s election. It also accused the administration of breaking up the Nigerian Labour Congress to facilitate the manipulation of organised labour. Further criticism of Jonathan also came via his government’s role in the 2014 governorship election campaign in Ekiti, where three opposition governors were prevented from campaigning and where armed soldiers and masked security operatives were used to terrorise voters. While crediting the Jonathan for signing the Freedom of Information Bill into law, the association noted that his administration failed to accede to requests for information under the law.

“For instance, when President Jonathan was requested to direct the Code of Conduct Bureau to make his asset declaration public, he refused, saying he did not give a damn about asset declaration, ” noted the NADL.

The group observed that the former President was just playing to the gallery in a bid to impress the international community. It said it was in account of its squalid human rights record that the American government refused to sell war planes and other items required in the anti-terror war to Nigeria.

Continue Reading
You may also like...
Related Topics:corruption, jonathan