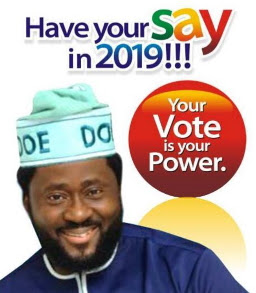 In this recent chat with Joe Agbro, Nollywood actor Desmond Elliot talks about his love for the people of his constituency, Surulere I, his support for Buhari and his political ambition.

On February 4, you celebrated your birthday. How did you spend the day?

Hmm… This is a political period. So, I first took my family out. As a matter of fact, I left them there because I had some political engagements.

Talking about politics, did you envisage your experiences so far and what’s your view on the Not Too Young To Run campaign?

It’s something I’ve been working on since 2006. I had friends who were in parliament. I know what they go through. My major mentor in politics is Honourable Dan Mayuku in Delta State. So, it’s not something that was unexpected. And things go bad every year, so you find your constituency really relying on you for almost anything and everything, which is no fault of theirs. You’re the closest thing to government for them. And they need to identify with some government something to give them some ray of hope. So, you’re more like hope for the masses, doing the job of the executive, going round looking for jobs for your people. The only thing is I’m hoping the federal system will be able to complement the state so that even we at the state legislature will be able to do better.

We need to revitalise the orientation agencies. They never had the idea from 1999 till 2018. The National Orientation agencies have no idea what they are doing and that is a big anomaly. We need to start growing the young polity. They are so disenfranchised; I’m talking about the youths of today. They see no hope.

You directed a movie, ‘Disguise’, set to premiere soon, as well as acted in ‘Esohe’. With your busy schedule as a lawmaker, how did you find time and energy to still do movies?

We’re not formally expected to do these things but the truth is we must put laziness aside. We’re in recess now but I’m at work (at the Lagos State House of Assembly). Truth is you can’t just sit down at home and say you’re on break. I’m coming from a sector, which is entertainment. And when I go there, what they can do for me is put in some of my constituents into the movie. They need to see how it works and it encourages them as well.

Talking about ‘Disguise’ and other small productions, it’s when we’re on recess like this. Like next week now, I’m getting myself prepared because I’m not resuming till March and I have to make use of this time. Besides, I want the name to still be recurring so that after four years, they’ll still remember me.

Don’t you have plans to seek re-election?

You see, it’s called politics. Politics is a game, whether you like it or not. And it’s a game of life. So, you can aspire. I’ve seen million and one politicians who come here, do everything. And when they leave, they end up with nothing. I don’t want to be put in that. I have four children. I have a family. You must make sure that where you’re coming from is still protected.

Between being a politician and an actor/filmmaker, which has been more demanding?

All. But for now, my first constituency is my people of Surulere. So, that is majorly demanding. The other one (Nollywood) is supplementary. It’s leisure. It’s something that makes me happy. I just go, hang out with friends, chill with them, assist in whatever help they need. But it’s still demanding itself.

How has your new status as a lawmaker affected your relationship with your Nollywood colleagues?

Nothing ooo. I’m still their guy (laughs). I mean, there’s always been mutual respect. Anything you add on your name is just blessing.

Big Brother Naija is ongoing at the moment and there have been opposing views about whether it is good or bad. For you as a lawmaker, parent and also an entertainer, do you watch Big Brother?

Oh yes… I’ve been to the house (Big Brother House) a couple of times. I mean other ones. I’ve not been following this up. I only saw the opening day show because of my very tight schedule. But personally, it’s entertainment. And I hate hypocrisy. A lot of the people criticising Big Brother do worse. And then you now criticise what they’re showing on television as if they’ve done the worst thing on earth. It’s a game and you have the power to turn off your TV. You have the power to subscribe and unsubscribe. You have the power to do anything. That’s not to say that immorality should be shown. I’m a man of faith but I’m not going to prevent people who want to derive entertainment from certain entertainment things from having their fun.

It’s everywhere, so I don’t want to make it seem like it’s prevalent only in the entertainment sector. You want to ask for some sort of gratification to assist someone. I think that is wrong personally.

In your party, the All Progressives Congress, some segments have asked President Buhari to seek re-election in 2019 even as two former presidents have expressed the view that a younger Nigerian should be president. What is your position on this development?

Okay, you’re asking me a very germane question, very sensitive and yet a question that needs answers. I will say first and foremost that I am Pro-Not Too Young To Run, let me get that categorically clear. Number two, I will ask this question; how many of our young people understand what it means by Not Too Young To Run? How many of our young people have their PVCs (permanent voters’ cards)? Because you’re telling the president now to go away. And pick who? I ask Nigerians. Who is the young Nigerian today that is well-equipped mentally, has the power to do administration, understands the complex nature of Nigeria – Hausa, Yoruba, Igbo, minorities.

In our bid to have younger people handle the helm of affairs, we need to change the narrative which is why I say, ‘give a Buhari for instance who probably has only one more term. If he comes into government and they now begin to set the ball rolling for younger people to start taking over the administration, I’m a strong proponent of that. This Not Too Young To Run should be given four to eight-year range so that there is an intentional, gradual inculcation of young people. When I mean young people, people in their twenties, people in their thirties. So, I’m not speaking for myself. That’s not to say I can’t aspire.

I think unless government of the day intentionally begins to push them (youths) in, we will become a Libya.

So, are you pro-Buhari or not?

Firstly, I’m a party man to the core. I’m a loyalist and then I am with President Muhammadu Buhari.

If there was one thing you have the power to change about governance in Nigeria, what would that be?

I would remove totally tribalism. I will remove religious sentiments. So, if you ask me what the one thing is, it’s more than one. The bane of our problems is tribalism. I grew up in Jos, Plateaus State. I love that city like no-man’s business. But I can’t run for office in Plateau State. I wish I could. So, I want a Nigeria that is devoid of tribe. And Lagos is the only pro non-tribal city that I know in Nigeria. Dem no dey look Uche face. They don’t want to know who you are as long as you have what it takes, you would be given a fair chance.

How did you feel when some Igbos were calling for the secession of Igboland from Nigeria being a product of a Yoruba father and a Delta Igbo mother?

I don’t know. Maybe you should be the one to help me out here. You are born to a Yoruba father, you grew up in the north with Hausas, when people see you, they would think you’re even Hausa. Your mother is from the eastern part of Nigeria, partly Niger Delta. Your wife is from Akwa Ibom, which is south-south. So, you help me answer the question. Where do I stay? Who do I criticise? Who do I fight? It’s a question I want to throw to Nigerians. Do I go and fight the Igbo man that gave me food to eat in Nollywood for so many years? I can’t, because he’s part and parcel of my progress.